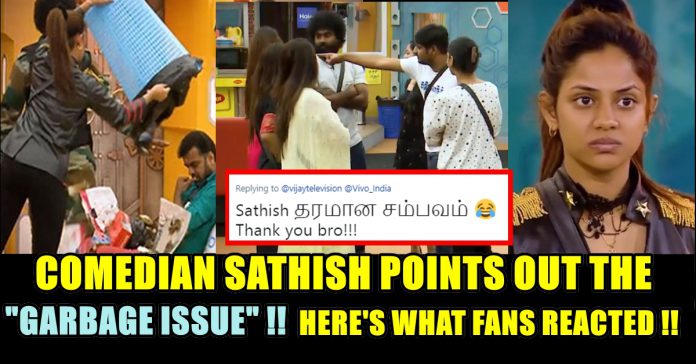 On Thursday’s Bigg Boss Tamil episode, Aishwarya continued as the dictator of the house. She gave tasks to the housemates who finally understood the task and did as told by the dictator. Aishwarya continued to be strict and meted out punishment like a true dictator. Yaashika and other housemates were sent to jail where they came up with the idea of a revolution and tried to overthrow the queen. This resulted in a huge drama in the house. Daniel, who was supposed to be Aishwarya’s commander, also disobeyed her resulting in a huge commotion in the house. Ponnambalam saw this as an opportunity to gain access to the queen and overpowered her by almost choking her and threw her in the pool. The housemates who were locked in the jail also escaped. But once Aishwarya came out of the swimming, she raged about being choked and pushed into the pool and demanded Bigg Boss open the confession room.

She was not able to utter a word or explain what she was going through. Outside, the housemates fought with Janani Iyer and Daniel and explained that Aishwarya was overreacting. They also said how the last two days they took her punishments patiently and put up with her attitude. Instead of understanding that this was just a task, the housemates got involved in it personally and everyone’s ego played a huge part in the way the task ended. Bigg Boss told Aishwarya that she performed the task very well and told her to come out of her character. Aishwarya asked Bigg Boss if the task has concluded, to which Bigg Boss replied that she will be informed of the same once she goes to the living room and the episode ended.

Today’s promo showed Actor Sathish , Arya and DD entering the bigg boss house for the promotion of Gajinikanth movie. In the Second promo actor Sathish asks where that “Garbage” incident happened. The promo also suggests Aishwarya blaming Mumtaz and saying either one of them should exist in the house. Watch the promo here :

Here’s what people reacting for this promo :

What do you think on this promo , comment below !!

India suffered an embarrassing 159-run innings defeat in the second Test against England after yet another batting failure on day four at Lord's, leaving...