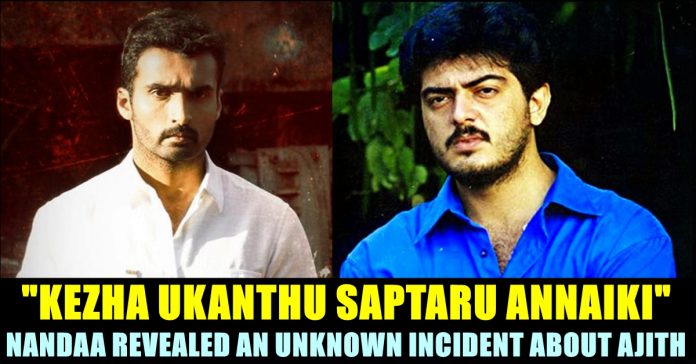 Fans of actor Ajith kumar are celebrating their idol’s 49th birthday today by uploading his pictures, videos and quotes in social media platforms. One such video shows actor Nandaa who is known for his work in Tamil film industry, sharing about an unknown fact about actor Ajithkumar that took place during the shooting of “Kandukonden Kandukonden”.

Nandaa uploaded a picture of himself from the shooting spot of the Rajiv menon directorial few weeks ago. In the picture he can be seen sitting along with veteran actress Sri Vidhya, Actress Tabu and with Actor “Nizhalgal” Ravi. “A memorable shot taken during the shoot of Kandukondein kandkondein with sreevidhya Mam, n ravi sir & tabu….” his caption for the post read.

In a recent Instagram live interaction conducted by VJ Parvathy, Nandaa shared about how Ajith Kumar is staying humble after all the successful ventures he went through. When Nandaa was questioned about that particular picture, he said “Kandukonden Kandukonden was shot before the release of “Vaali”. During the shoot of Kandukonden Kandukonden, he didn’t attain the stardom. “Vaalu” was the biggest break in his career. In that shooting spot, everyone including Mammootty sir, Aishwarya Rai mam would be together as a group but Ajith sir will be alone. Because he was not into that circle actually” he said.

“That was the time when caravans started being used. Aishwarya Rai was the only artist who was allowed to use caravan at that time. No one including Mammootty sir or Ajith sir or Abbas sir had caravan during the shooting of that film. We used to sit and eat it in an open space. At that Karaikudi house, there will be one huge dining hall where the main crew of 15-20 people including director and cameraman would sit and eat. Ajith sir avoided eating there as well. He prefered eating in a varanda outside. He was accompanied by a single assistant boy at that time. He would sit and eat with that assistant boy. They both will eat together. I still remember he sat right there in the floor and ate by talking with lightmen and others.” the “Mownam Pesiyathe” actor added.

“After the release of “Vaali”, his fame reached sky high. But we respect him because he is still staying humble after reaching all these heights. We respect him so much not just as an actor but as a human being” he added. This particular video clipping is being widely shared by the fans of the actor. Ajithkumar who enjoys a huge fanbase in Tamilnadu today, has acted in 59 films so far. He is all set to appear as cop in his upcoming film “Valimai” directed by H.Vinoth of “Sathuranga Vettai” fame.

Comment your views on this interesting face shared by Nandaa on this special day !!

Saravana Bhavan, the largest South Indian restaurant chain in the world, is now accused of forcing employees against their will. The 39 year old...