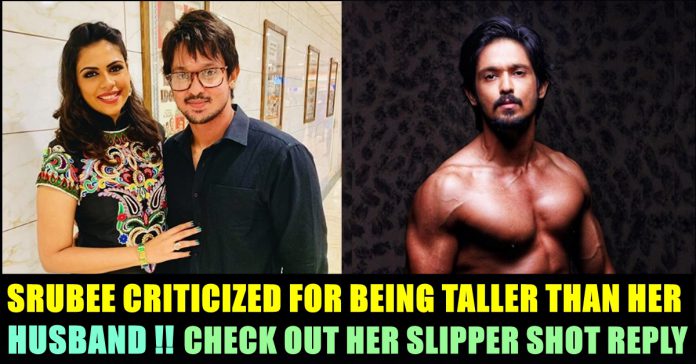 Actor Nakhul’s Wife Shuts Down All The Trolls Which Criticized Her Height !! Here’s How Nakkhul Reacted !!

We all know that it is not that easy to avoid the attention of media and public for a well known celebrity. But have you ever thought of being in the shoes of a partner of a well known celebrity ?? You might get more attention that the celebrity himself/herself is getting. In this recent social media post, Actor Nakkhul’s wife has shared a message about the struggle she has been facing for being taller than her husband.

Many happy returns of the day my Sruti Babay! . . Recorded this when you weren’t at home.. A small dedication to you. Whenever I hear the lyrics of this song it reminds me of you. Plus it was raining like crazy that evening.. perfect song for a perfect soulmate ☺️ Have a happy Birthday my Lobster 🦞 . I heart you @srubee 💗 . . Sorry for about the razor hazard! Deal with it, you have no choice 😐 . . #birthdaybaby #nakkhulsrubee #nakkhul #rainyevening #rains #cantkeepcalmitsmywifesbirthday #dedication #guitarcover #tamilsong #u1 #deepavali #soulmate #wifeysbday #leobaby #mylioness #mycupcake

In a recent Instagram post Sruti revealed what she is going through since her childhood for being a tall girl. She revealed that she was discouraged by many people for being tall since her 10th grade and they even criticized her by saying that it is difficult for her to find a husband as tall as her.

She says that she is glad to get Nakkhul as husband who loves the fact that she is taller than him and smiles at the people who mentions it to him. She even pointed out few benefits of being a tall girl which included reaching shelves easily.

She also wanted people who thinks that a wife being taller than her husband is weird to change their mindset. “True love transcends beyond age, looks, color, religion and flaws” she wrote in her post. She even said that those thoughts are shallow and people who have those in mind needs to get mature.

Nakkhul shared this post in his Instagram story and expressed his love towards his wife by writing “Wifey” with a heart emoji.

Well. it’s a crystal clear statement to make people understand that being a perfect couple is not about being perfect in appearance at all.

Viral Video Of Mayor Priya Being Mentioned As “Kuzhanthai” !!

Video of new Chennai's Mayor Priya facing the press for one of the first times is going viral in social media as someone, presumably...