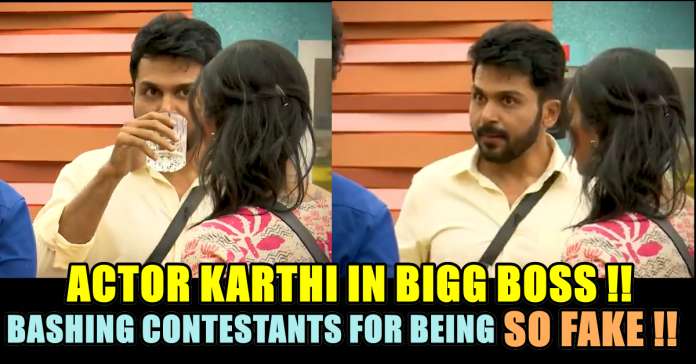 The Bigg Boss Tamil house was in a mess on Wednesday as the housemates performed the cops and robbers task. The team that was put in the ‘public’ category was having their food, toiletries and other essentials stolen and the ‘police’ team wasn’t doing the job effectively. Daniel, Yaashika and Aishwarya were the ‘thieves’ and they were the only ones to perform their task with sincerity. The public, who were expected to trade food for money was blamed for being heartless and not serving food to the police.

Senrayan was especially disappointed about not getting breakfast. He stole coffee from Janani, who is known as ‘visha bottle’ (poison) and has the tendency to create problems, which was exactly what she did. She drank the coffee sip by sip in front of Senrayan, who was already starving. The public also realised that the police was being partial to the thieves and a mutiny took place in the house. The public, headed by this week’s team captain Ramya, refused to play the game. They also charged the thieves and the police money for food. Mahat also got mad at Balaji, who told him to beg for food instead of asking them for free food. This started off a heated argument and Balaji cried.

Ramya was removed as the captain by Bigg Boss because it was under her leadership that the public team stopped playing the game. Bigg Boss stated that she did not do her job properly. Nithya took over and the three teams continued the task. Daniel, Yaashika and Aishwarya were appreciated for their performance and they continued to steal with the same enthusiasm. The police team, who fined everyone for not saluting them, had the highest money and the day ended with the police team and the robbers team not having much to eat. Now the new promo video shows that “Kadaikutty Singam” movie crew enters the Bigg Boss home , most probably for their movie promotion. In the first promo they seem to be cool , calm , nice and sharing wits each other. Check the promo below :

But in the second promo it is shown that Actor Karthi saying that everyone in the house is acting when Danny asks him “how are we doing?”. He also seen disappointed for the house being unclean. When Mumtaz approaches him seeking apology he openly says “There is no apology for you guys , house should be clean always. People are watching !! ” he warns. Watch the promo below :

Check out the fan’s comments :

What do you think about Karthi’s reaction ??

On Monday, Malavika Mohanan of "Master" fame set the Internet on fire by uploading a series of swimsuit pictures of herself from Maldives. The...