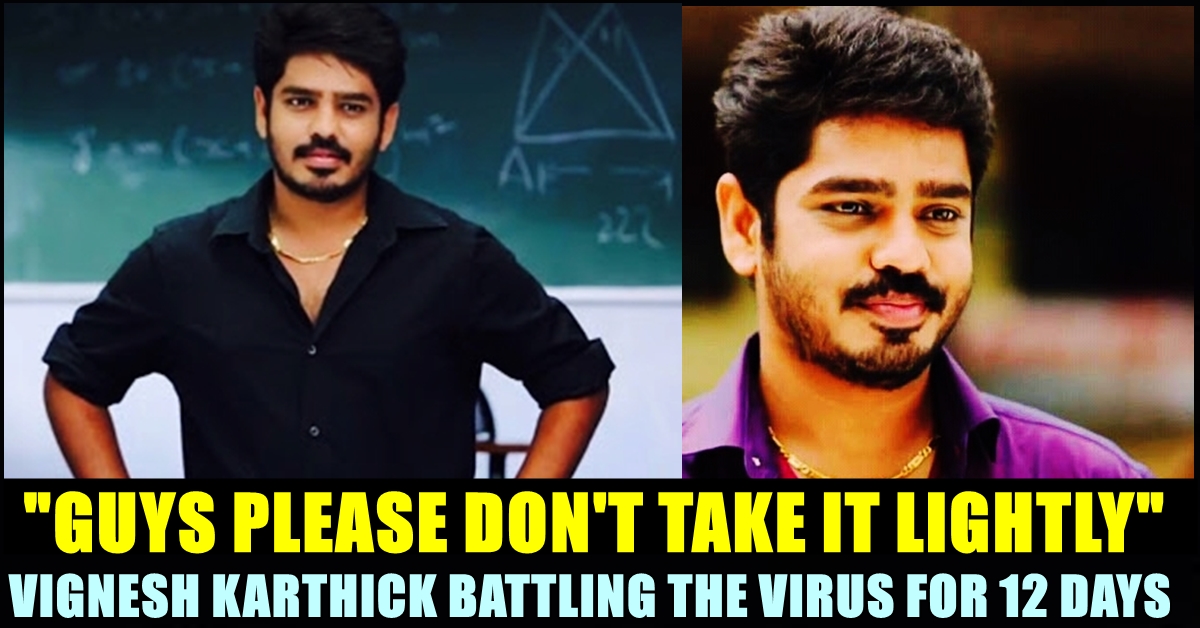 Now, multifaceted Vignesh Karthik who is widely known for his appearance in Vijay television, shared about his personal experience with his followers with a message to help them amidst the pandemic situation. He published the post after his fever reduced to 99.6 after seven days of continuous fever above 101. He shared what he went through for the past 12 days.

After having mild cough and mild fever for conswcutive days, Vignesh said that he found himself positive for the COVID 19 on the third day. When he took a CT scan on the same day, the lung infection score showed 2 out of 40. Vignesh said that he lost smell and taste on the 6th day which is when his temperature level increased to 100 from 98.6.

Vignesh said that the constant raise in temperature level panicked him a little as the Dolo tablet he was taking didn’t make any impact. “The temperature started to raise above 101 with no effect to dolo even when I had it 4 times a day” he said in his post. When Vignesh took another CT scan with the advice of his doctor friends, he found that his lungs got infected with the temperature level of 101. He was also asked to monitor his oxygen level constantly.

“The temperature continued to be above 100 ( This was the 6th day of continuous persistent fever) and blood investigations came with a little raise , but nothing alarmingly high. One of my friends Gopi Nath’s wife Nisha, prescribed me steroids seeing the blood test. But I was constantly worried and googling , the death news etc added to my anxiety and the neurosis was already doing its job” Vignesh said in his post and his temperature level decreased to 99.6 with an oxygen level of 96 on the 12th day.

“But still this virus is extremely unpredictable and dodgy.” he said in his post and added that his parents developed symptoms for the virus for the 6th continuous day. “Guys lemme tell u something, please don’t take it lightly. The first 5 days u may feel that u have won over the virus…the real game starts from day 6 and pleaseeee keep monitoring urself continuously and be in constant touch with ur doctor friends.” Vignesh advised and thanked people who helped him during the tough phase. “I hope we will get through this and win this vicious battle !” Vignesh concluded.

Tamil Nadu reported 33,075 new COVID-19 cases and 335 deaths on Monday. A total number of 18,005 have died in the state. As of Monday, Tamil Nadu has a total active caseload of 2,31,596. Chennai recorded a small dip on Monday after 6,150 persons tested positive. However, the number of deaths in the district remained high, at 86. Along with politicians, important personalities from other industries such as sports, cinema are also doing their part to fight the deadly virus. Many cinema celebrities with highest number of followers in social media, has been sharing SOS posts to help others.

Priya Bhavani Shankar’s Replies To The Comments That Criticized Her Tribute Post For Ki Ra Wins Internet
Actress Blamed Fans For The Decision Made By Rajinikanth Regarding His Political Stint !!