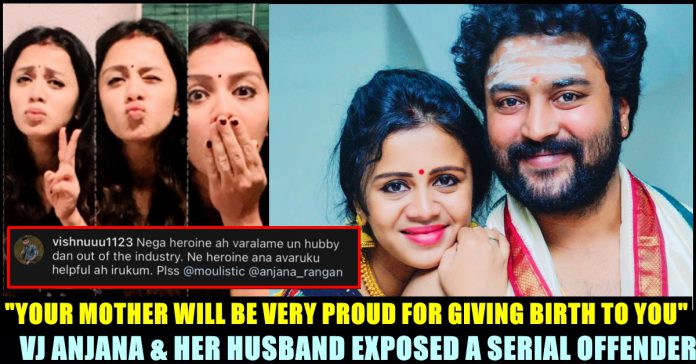 Actor Chandramouli who is known for acting in Prabhu Solomon’s “Kayal”, exposed a serial offender who has been spamming the posts of his wife, VJ Anjana who is pretty much active participating in photo shoots for the past few months. The abuser whose handle name reads “Vishnu”, commented on one of Anjana’s posts saying that she could become a heroine in film industry as her husband is “out of industry”. Capturing the screen shot of his comment, Chandramouli said that he has been starting various accounts to comment on various photos despite numerous report and tagged the Greater Chennai Police to make a complaint.

“This guy has the audacity to start various accounts and comment on various photos despite numerous reports.@greater_chennai_police_… Can someone look into it? I’m least bothered with this faceless manner less idiot… whom Il’m sure will not hesitate to sexually assault the women from his own home. @vishnuuu1123 you’re after all few hours away from @greater_chennai police and I. I’m warning you.” Chandramouli replied to the abuser’s comment inititally.

Capturing the screen shot of it, he went on to say “Its definitely not because of the above statement he
made. Hes made more such sexual comments against @anjana rangan. Why’s giving these faceless
basterd so much audacity to just comment anything ? @vishnuuu1123 is the culprit @greater chennai police. Can you please look in to it” through his story.

“Seems like the faceless basterd has vanished @vishnuuu1 123. Now let me make a clear open statement.. to all the online abuser’s and sexual predators. My 3 year old son hugs and kisses my home-help the same way he does for his mom sister and granmom. I can do the same to all and feel
warmth and love sans lust. That’s the difference between you and US. Education plays an important role. Grow a pair and understand no bloody person is above or below anyone. Your vulgar statements will hurt us the same way it will hurt your sister and mother. Peace out P.S. if you still dare comment, worry not. You are not worth my time. We will in fact pin your comment for the world to see.” the “Kayal” actor said through his next story.

Sharing the story of her husband, Anjana asked the abuser whether he has a job or not. “Is abusing others your full time job ? Your mother will feel very proud for giving birth to you” the TV host asked.

Anjana Rangan is pretty much interactive with her fans and followers in social media platforms. The 31 year old host who enjoys quite a huge fan following in social media platforms due to her unique way of presenting shows, did programs for Sun Music for nearly 10 years. She got married to actor Chandramouli of “Kayal” fame in the year 2016. The couple gave birth to an adorable son and named him as “Rudraksh”.

Anjana who has 1 million plus followers in Instagram, is engaging herself by posting pictures of herself from her photo shoots that were conducted in her terrace and in other places around her house. Most of the pictures in her Instagram timeline were captured by her husband Chandramouli who was last seen in a film named “Thittam Pottu Thirudura Kootam”.