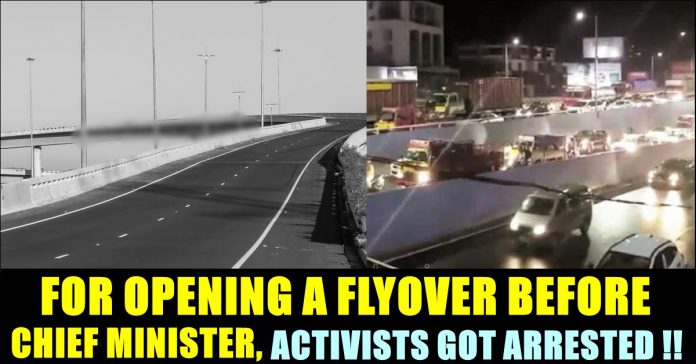 Activists Got Arrested For Inaugurating Flyover Before CM !!

Activists Nipun Cherian, Sooraj Angelos and Raphael of V for Kerala unit got arrested in Kerala for opening a fly over to reduce the traffic before its inauguration. The Vytilla flyover of Kochi was supposed to be inaugurated by Kerala Chief minister on Saturday. After arresting them, Police registered a case against them for damaging public property. The incident was took place at 7 PM on Tuesday. A case was registered against 10 vehicle owners who trespassed the bridge, says reports.

It is reported that the three men will be produced in the court of Wednesday and will be remanded. Followed by the incident, security was tightened at Vytilla and Kundannoor flyover and it is reported that police estimated a loss of Rupees 1. 5 lakh. It is notable that the activists of V for Kerala protested to open the flyover the other day and got stopped by the Police. They demanded the government to let public use the flyover as the construction was completed but was sent back by the Police.

The flyover is formally slated to get inaugurated on Saturday by Chief minister Pinarayi Vijayan. “This amounts to people’s inauguration of the flyover. We will take legal recourse and approach the High court against the Police action denying the motorists their right to use the flyover which was built using taxpayer’s money and which has already been handed over to the Public Works department by the contractor on completion” Nipun Cherian, Campaign controller of V for Kerala said to the media. Social media came in as a support to the activists and questioned why people should be suffered by the traffic despite of the completion of the construction.