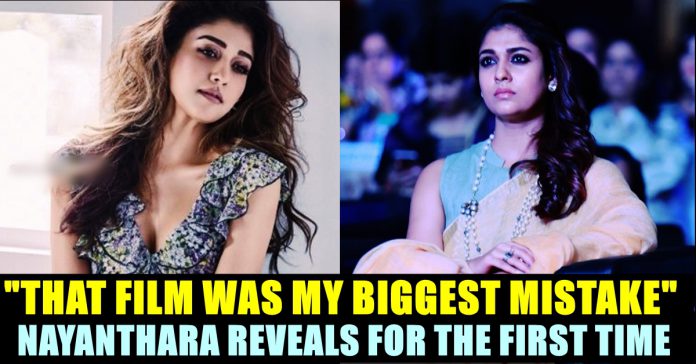 Nayanthara, one of the highest paid actresses of South Indian film industry is busy in her work. She is the only actress who manages to act in both female centric movies and hero oriented movies. The surprising fact about it is that the “Bigil” actress shines in both the regions.

Apart from that the actress had a release with Sivakarthikeyan and with Nivin Pauly in this year. She is also the female lead in Rajinikanth’s upcoming film “Darbar” and also working in her own production venture “Netrikann”. Now after all these days, Nayanthara has opened up about the worst film she had done in her career.

The actress who debuted in Tamil industry with Sarathkumkar’s “Ayya” has said that working in the film “Ghajini” is the biggest mistake in her career. Nayanthara played the role of Chithra in Suriya’s Ghajini, directed by AR Murugadoss. Elaborating more, she said, “I consider doing Ghajini the biggest mistake in my career. While signing the film, I got a narration for my role but it didn’t turn out the way as promised. I felt cheated. My character was quite different from how it was narrated. From then on, I made a conscious choice to listen to scripts properly.”

According to reports, She further added that she regrets fact of the role she played had less impact than the role which was played by Asin. In the movie Ghajini Nayanthara acted as a medical student. Interestingly the actress has again joined in the crew of A.R Murugadoss in upcoming “Darbar” who directed “Ghajini” earlier. After that she even collaborated with actor Suriya in number of movies including Aadhavan and Masss.