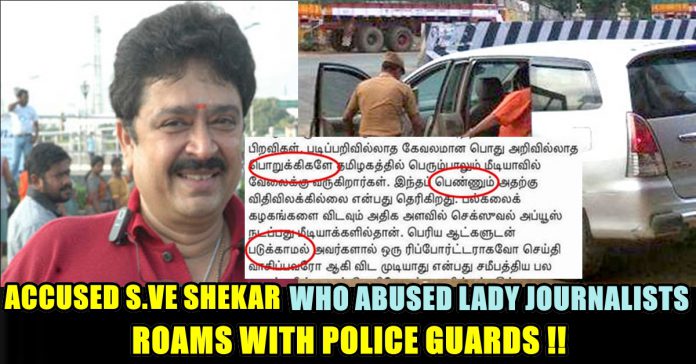 Tamil Nadu BJP leader S. VE. Shekher Venkataraman, an actor and playwright, has provoked anger by sharing on Facebook a post that disparages the woman journalist who had objected strongly to the Governor patting her on the cheek on Tuesday. The TN Governor apologized to journalist Lakshmi Subramanian for the gesture, which was widely seen as offensive. But the post on S. VE. Shekher’s page said he should “wash his hands with phenyl” for touching her. 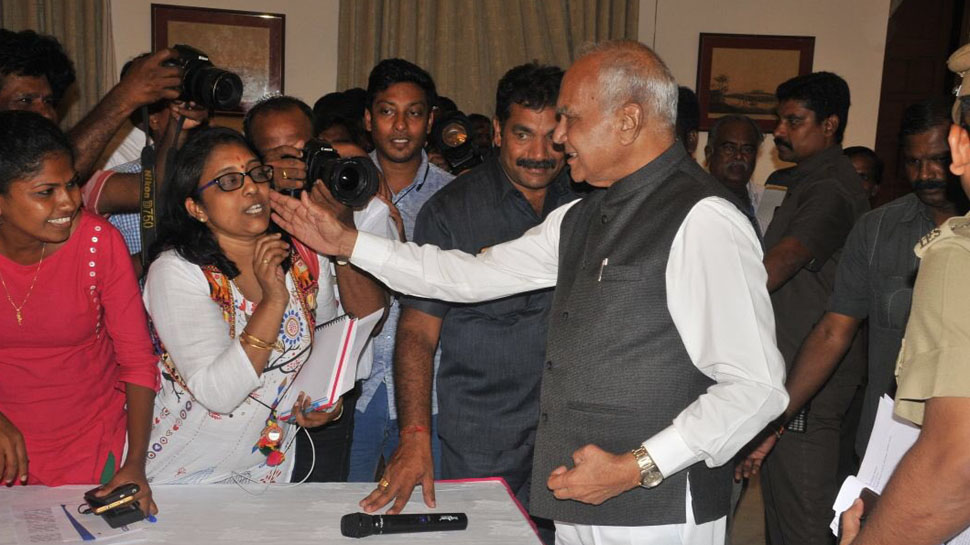 The Facebook post shared by Shekher is titled “Madurai University, Governor and the Virgin Cheeks of a Girl”. It claimed that more sexual abuses happen in media houses than in universities. It also claimed that a woman cannot become a reporter or news reader without sleeping with bigwigs.Check his post below : 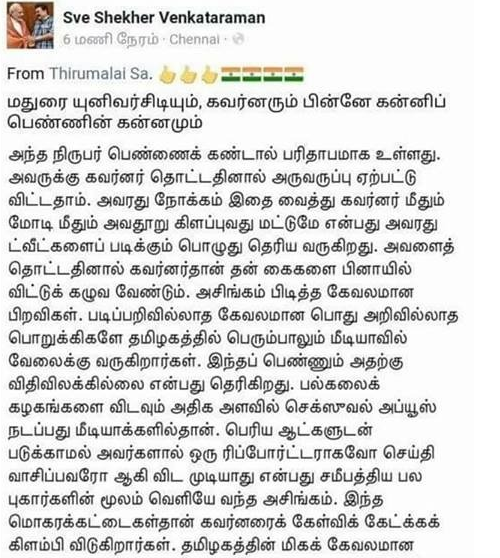 The cybercrime wing of the city police has registered a case against S Ve Shekhar under three IPC sections for posting inflammatory remarks about a woman journalist who complained against governor Banwarilal Purohit for patting on her cheek at a press conference early this week.

The cybercrime wing police registered a case based on the complaint of the journalists association and slapped a case against the BJP member under IPC Sections 504 (intentional insult to provoke breach of the peace), 505 (1) (c) (with intent to incite, or which is likely to incite, any class or community of persons to commit any offence against any other class or community), and 509 (Word, gesture or act intended to insult the modesty of a woman), and Section 4 of TN Prohibition of Women Harassment (Prevention) Act. 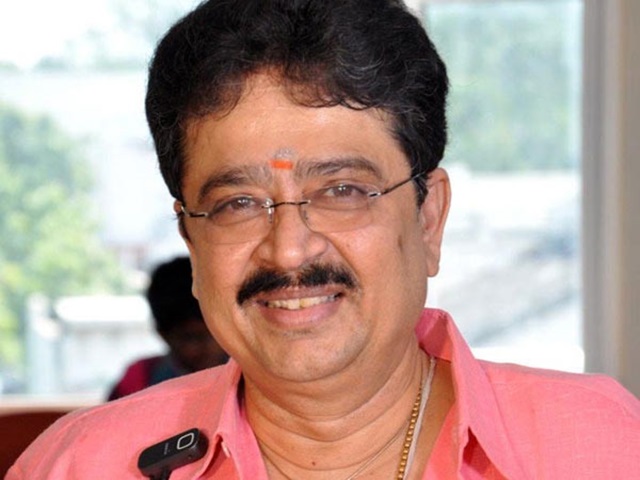 The Madras high court denied the anticipatory bail to the actor who apprehended arrest in connection with a criminal case registered against him for his alleged derogatory social media post against woman journalists.

Dismissing Sheker’s advance bail application, Justice S Ramathilagam directed police to take action on the complaint as they would do on a normal complaint against any person.

Ms. Justice Ramathilagam also said the language used in the Facebook post was abusive and obscene and not expected of a person of the petitioner’s calibre and age “who claims to be a literate with lot of credentials and a lot of followers. Instead of being a role model to his followers, he has set a wrong precedent. 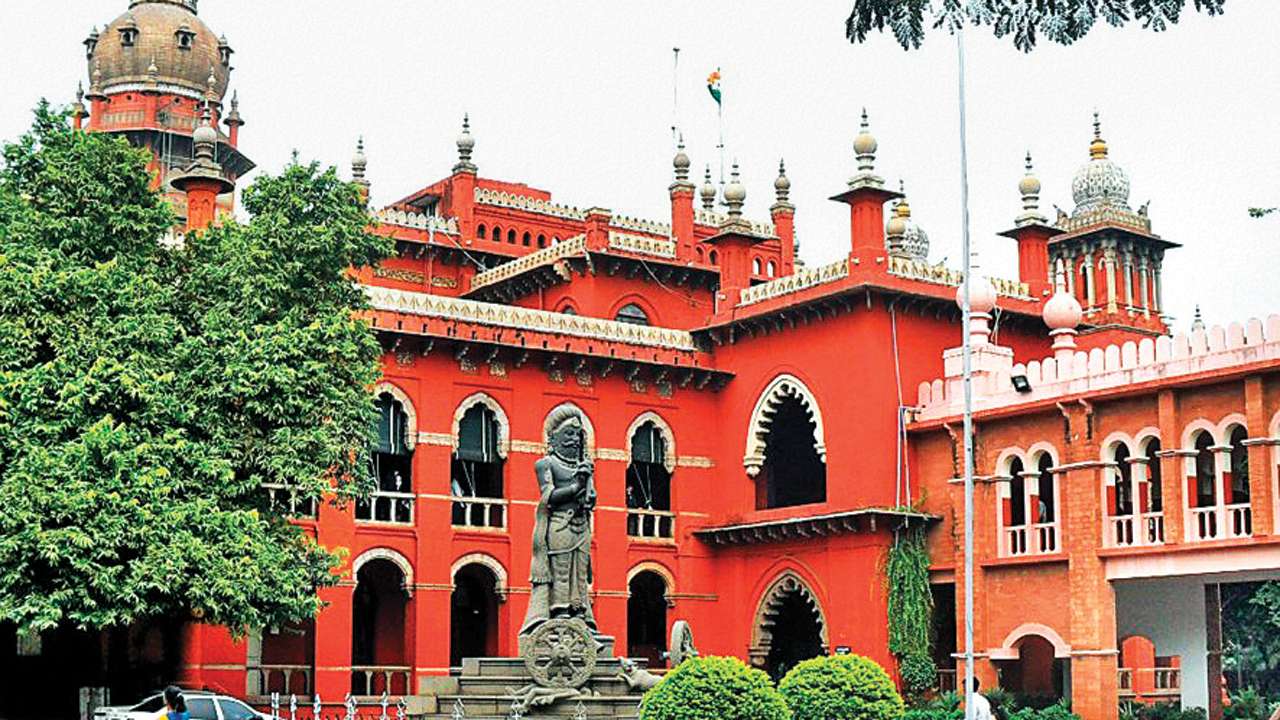 “Every day, we see young emotional boys getting arrested for doing this type of activity on social media. Law is same to everyone and people should not lose faith in our judiciary… After seeing these forwarded words from a popular person… the public will look at every working woman with a suspicious eye,” the judge said.

After the judgement , the actor turned politician was absconded and the arrest has not been made until today. To our shock news surfaced that he was seen in a hotel in Kancheepuram with the support of Police who were armed. 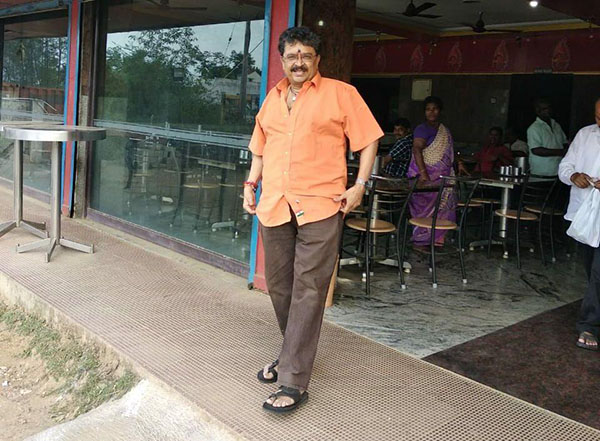 According to Nakkeeran , It is reported that S.ve. Shekar is about to celebrate his grandson’s birthday by throwing a party. For that he has made big arrangements in his house it seems and he has been inviting his political, cinema industry friends with invitation cards. To invite his one of the friend he has arrived to the hotel in Kancheepuram it is believed where he had food and relaxed by having Police officers as safety guards.

Realizing people’s strong hatred against him , S.ve Shekar used the power of his relatives who are higher authorities to have armed police officers as his guards. When people around him clicked photographs of him by hiding , it is reportedly said that he posed for them casually. It is allegedly said that people also took selfie with him. 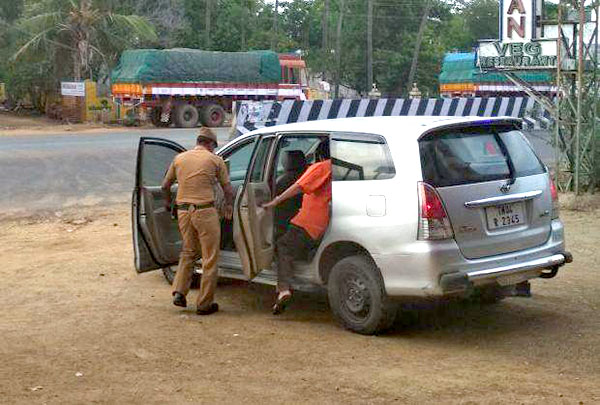 After eating, he went to his Innova car where the Police opened door for him say report in Nakkeeran. What do you think on S.Ve. Shekar’s happy journeys around the state being an accused ?