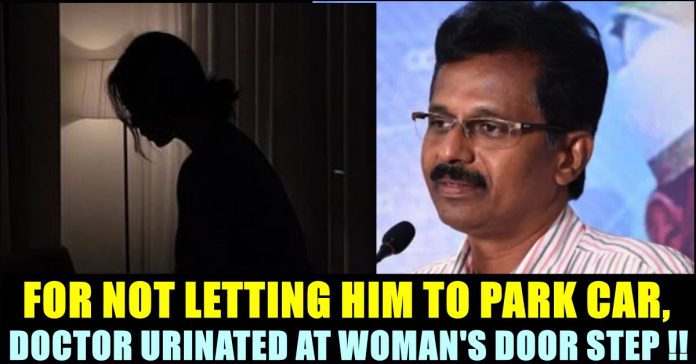 Dr. Subbiah Shanmugam, the national president of the Akhil Bharatiya Vidyarthi Parishad, has been charged for harassing his neighbour, a 52 year old woman named as Chandra in Chennai. The professor and Head of the Department of Surgical Oncology at Kilpauk Medical college and Royapettah Government Hospital, harassed the woman followed by an argument over parking slots.

The complaint of the victim has said that Subbiah urinated at her house and threw used safety masks at her doorstep. The videos and photos produced by Chandra in her police complaint, showed Subbiah Shanmugam urinating in front of her house. Balaji Vijayaraghavan, a stand-up comedian and a close relative of Chandra filed police complaint on 11th of July in Aadambakam police station.

Shanmugam and Chandra who are living in a same apartment in Nanganallur. After having an argument with Chandra over parking his vehicle, Shanmugam passed urine in front of her house to avenge her. The issue became a controversy after police denied to file the first information report initially. However, they registered a case after the issue was raised by the Congress National Student union of India in social media.

The issue started at least four months ago when Chandra asked Dr. Shanmugam to pay Rs.1500 for using her car parking slot at her apartment complex. Shanmugam used to call her and ask if she needs chicken knowing that she is a pure vegetarian. A family member said that the police didn’t register an FIR when they produced the evidence and gave only a CSR receipt. The relative alleged that police intentionally waited for Shanmugam to file a complaint to falsely make their complaint as a counter one.

However, Adambakkam police officer Bala denied the allegations and said that Chandra wanted a compromise. “The woman did not want the FIR and did not want details made public. She has told us about a compromise being worked out” he said according to reports. Now, a complaint has been registered against Shanmugam for harassment, violating quarantine rules and for “causing mischief” after the media attention.

Nidhi Tripati, general secretary of ABVP said that Shanmugam was innocent and the party will strongly back him. Refuting her statement, Vijayaraghavan, Chandra’s relative who registered the complaint said that they had no intention to take the issue forward.

Knowing about Shanmugam’s reputation as a doctor, the complainer wanted him to continue his service for people. “He has to undergo cognitive behavioural therapy and continue to serve the society. We decided to go public only after the organisation he belongs claimed the videos as fake” he said who added that the residents association of the apartment decided to take action as he was “habitually created nuisance” in the apartment.

Despite several media portals attempted to contact Shanmugam in order make him state his opinion regarding the allegations against him, he is not available to any of them. On Saturday morning, Dr. Shanmugam answered a call and said that he was attending patients and would call back according to Time of India.

Previous articleAnjana’s “Madisar” Post Triggered This Netizen !!
Next articleA.R Rahman’s Emotional Tweet On Being A Victim Of Bollywood’s Gangism !!

Directed by Thiagarajan Kumararaja, the screenplay for this film has been co-written by Mysskin, Nalan Kumarasamy, Neelan K. Sekar and the director himself. The...

Rana Daggubati , is an Indian actor, producer, television personality, and visual effects co-ordinator known primarily for his work in Telugu cinema, as well...

Actress Priya Bhavani Shankar, one of the busiest actress in the Tamil film industry teased actor Sathish for pairing up with "Cooku with Comali"...