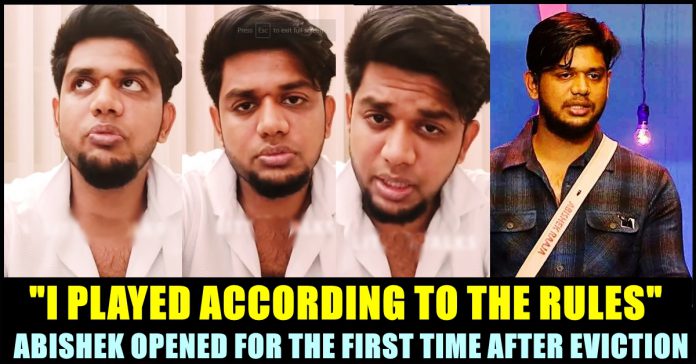 Abishek Raaja opened for the first time after coming out the Bigg Boss show, hosted by Kamal Haasan. The movie analyst said that he played the game according to the rules of engagement. Abishek who believed that he developed an equation with each and every housemate, said that he instigated a competitive spirit among the contestants only due to that reason. He also said that he stayed real inside the Bigg Boss house and would continue to do it in his life too.

After becoming the second contestant of Bigg Boss season 5 to get eliminated from the show, Abishek left viewers of the show to react in various ways. He who got evicted after getting less number of votes among the fans, got the offer from his co-contestants such as Pavni Reddy and others to receive special coins from them in order to avoid eviction. However, Abishek refused to receive them saying that he can’t continue his game after knowing public’s verdict. The movie reviewer left the house after having a long chat with Ulaganaayagan Kamal Haasan.

As soon as he got evicted, a number of fans expressed their frustration over the analyst getting evicted so soon who was busy providing content for the viewers of Bigg Boss. They felt other contestants such as Abhinay, Iykki Berry, Chinna Ponnu re not much active and never involved in doing something impulsive as much as Abishek.

Now, Abishek Raaja uploaded his first tweets after coming out of Bigg Boss house. “Bigg boss is a game and I played according to the rules of engagement. I was able to instigate a competitive spirit among the peers during tasks only because I developed an equation with each and every housemate” Raaja said in his note. “I put my longevity with the show at stake but I walked away with a satisfaction of staying real. If staying real is my ultimate testament, then that’s how I run my show and my life too.” he added.

Check out some of the top reactions his post received :

You can run your life how you want, what backfired is you wanted to run other people’s life inside bb.

One tip for you, Listen, listen ,listen ..if you listen more in a conversation you can sense what they really think, instead of your assumptions & exaggerated praises.