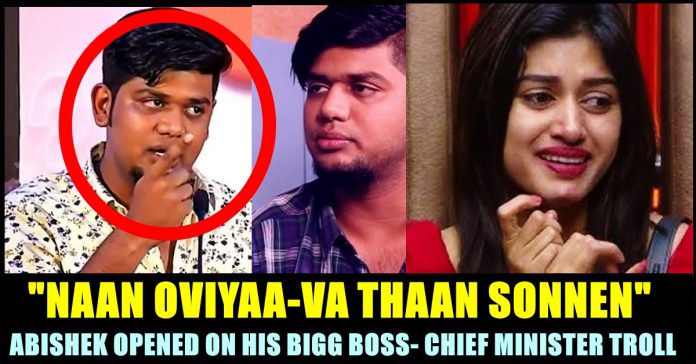 Abishek Raaja who recently got evicted from the Bigg Boss show, opened on the viral controversial video which did rounds alleging that the movie analyst trolled Kamal Haasan for trying to become chief minister through hosting Bigg Boss show. Now, after getting evicted, Abishek opened about it himself during an interaction with movie producer Ravinder Chandrasekhar. Abi said that he didn’t mention about Kamal Haasan but about the first season contestant Oviyaa, fans of whom trended “Oviyaa For CM” hashtag. Abishek also said that he is one of the biggest fans of Kamal Haasan and would never demean him that way.

In the viral video which was trending, Abishek could be seen saying that he belongs to the Bigg Boss generation where people are involved in doing stints to become chief minister despite of knowing that they are being recorded by camera. “I don’t believe things what I see through my bare eyes as I belong to a generation where people acting to become Tamil nadu chief minister in front of camera”

Many trolled Abishek for talking ill bout Bigg Boss show and participating in the same show as a contestant. Now, after getting evicted in three weeks of time, Abishek opened about the original context he made the statement. “It is very stupid” Abishek started answering and said that he is the one who uploaded most number of videos about Kamal Haasan in you tube.

“Everybody know that I am an ardent fan of him. In that debate event, I was talking about the housemates. At that time, a hashtag trended saying “Oviyaa for CM” and I was denoting about that” Abishek clarified and went on to ask “While you are arguing for “wife” in a show that debates about “Mother” or “Wife”, would you give up mother in your real life ? What logic is this ? It makes me laugh”

He also expressed his displeasure over youtube channels making flase reports about him and said that such you tube channels doesn’t have right to talk about “hypocrisy”.

Abishek who got evicted after getting less number of votes among the fans, got the offer from his co-contestants such as Pavni Reddy and others to receive special coins from them in order to avoid eviction. However, Abishek refused to receive them saying that he can’t continue his game after knowing public’s verdict. The movie reviewer left the house after having a long chat with Ulaganaayagan Kamal Haasan.

Abishek Raaja uploaded his first tweets after coming out of Bigg Boss house. “Bigg boss is a game and I played according to the rules of engagement. I was able to instigate a competitive spirit among the peers during tasks only because I developed an equation with each and every housemate” Raaja said in his note. “I put my longevity with the show at stake but I walked away with a satisfaction of staying real. If staying real is my ultimate testament, then that’s how I run my show and my life too.” he added.