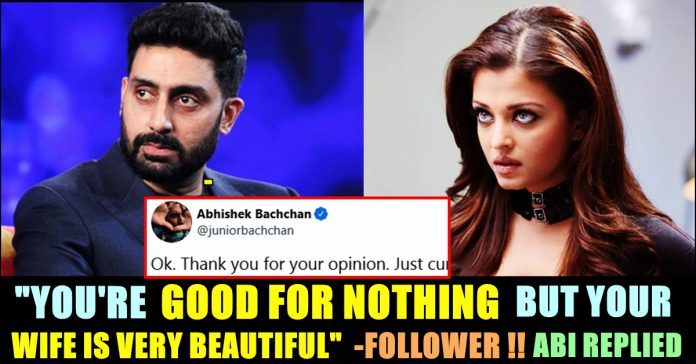 Abhishek’s Reply To Follower Who Dragged His Family Impressed Internet !!

Ahead of the release of his film “The Big Bull”, Bollywood actor Abhishek Bachchan replied to a troll in his trademark fashion. The actor who is known for his humble yet powerful replies to the detractors in social media, replied to a Twitter user who made an inappropriate comment about his personal life. The actor’s fitting reply is winning hearts of the many of his 15 million followers in Twitter.

Abhishek made his acting debut in 2000 with J. P. Dutta’s war film Refugee, and followed it by starring in over a dozen films which were all critical and commercial failures. His first commercial successes came with the 2004 action films Dhoom and Run, which changed his career prospects. Bachchan went on to earn critical appreciation for his performances in the dramas Yuva, Sarkar etc.

The actor who enjoys one and half crores of followers in Twitter, often spends time with his followers and never shied to give reply to their criticisms. He has this habit of winning the hearts of his followers through his cheeky yet intelligent replies to trolls and mean criticisms.

Most recently, reacting to the trailer of his upcoming film “The Big Bull”, a twitter user named “Sparsh Saxena” dropped a derogatory comment. He called the actor as “Good for nothing” and said that the only thing that makes him jealous of the actor is that he has a “beautiful wife” and also stated that he doesn’t deserve her.

As the user deleted his comment now, Check out the screen shit below :

“Ok. Thank you for your opinion. Just curious.. who are you referring to because you’ve tagged a whole load of people? I know Ileana & Niki aren’t married that leaves the rest of us (Ajay, Kookie, Sohum) soooo…
P.S- will get back to you about @DisneyplusHSVIP‘s marital status.” his reply read.

Ok. Thank you for your opinion. Just curious.. who are you referring to because you’ve tagged a whole load of people? I know Ileana & Niki aren’t married that leaves the rest of us (Ajay, Kookie, Sohum) soooo…
P.S- will get back to you about @DisneyplusHSVIP ‘s marital status.

This reply from his garnered widely positive response from his followers. Check out some of the below :

its truly inspirational how u maintain ur dignity and dont let the situation get out of control when you respond to such unpleasant situations. some ppl just need to bring someone down to gain attention. best to ignore them.thats a cost one needs to pay for being a celebrity

Trolls who target families that too women folks are actually insulting their own parents for lack of good upbringing. Maybe their parents must themselves would be ashamed if they saw tweets & wondering what went wrong in our upbringing.

This guy is actually jealous of Abhishek Bachhan’s Look, physique, humanity and humbleness not to mention the classy education he got.your behaviour decides who you get in your life as a life partner. And the world needs more Junior Bachhans as husband. He is a man of integrity.

The calmness you hold is something beyond this all. Maybe some may like ur work nd other don’t but it doesn’t give any damn right to utter anything to you. Success isn’t defined by hit films but the character, behaviour and maintaining relations well. ❣️👍

Last year, When a follower mocked him for being a son of Amitabh Bachchan by sharing a picture of a man who has similar looks of the “Guru” actor, Abi replied saying “Hahahaha. Funny! But still better looking than you!”

Hahahaha. Funny! But still better looking than you! 🙏🏽

Comment your views on the way Abhishek is handling the online trolls !!

Nanthini aka Myna is a TV actress who shot to fame via the popular Vijay TV serial 'Saravanan Meenachi', where she played the character...