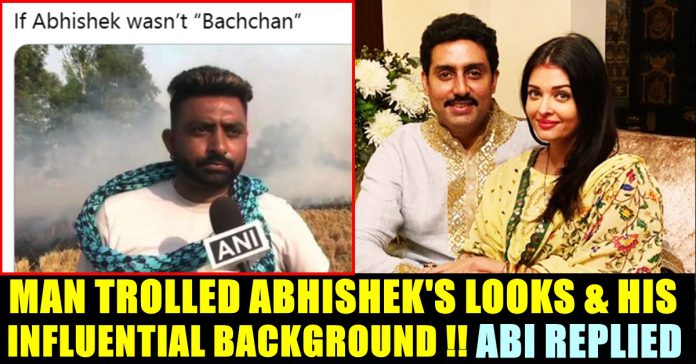 Bollywood actor Abhishek Bachchan has the habit of winning the hearts of his followers through his cheeky yet intelligent replies to trolls and criticisms. Most recently, a reply he gave to a twitter user who criticized his looks and his influential background, went viral among his followers and even made headlines.

Abhishek made his acting debut in 2000 with J. P. Dutta’s war film Refugee, and followed it by starring in over a dozen films which were all critical and commercial failures. His first commercial successes came with the 2004 action films Dhoom and Run, which changed his career prospects. Bachchan went on to earn critical appreciation for his performances in the dramas Yuva, Sarkar etc.

The actor who enjoys one and half crores of followers in Twitter, often spends time with his followers and never shied to give reply to their criticisms. On Monday, a twitter user named as Gentle Giant, posted a picture of a man and said that Abhishek Bachchan would look like him if he is not a son of Amitabh Bachchan, one of a topmost actors in the history of Indian cinema.

Abhishek who not even got tagged in this tweet, happened to see it with the help of his fellow twitter users. The “Guru” actor decided to give him a reply he deserves, wrote “Hahahaha. Funny! But still better looking than you!” on seeing the profile picture of the troller.

Hahahaha. Funny! But still better looking than you! 🙏🏽

This reply of Abhishek garnered four thousand likes and hundreds of comments. Few felt that this kind of harsh comment from Abhishek for a light hearted humour is not desirable. Check out some of their replies below :

I am sure @iKunaal is not a troll, he was just trying to have a funny & harmless banter.

Why this arrogance, he was just being funny. He was not mean to you.

AB you just replied like a 'nibba' 😏. @iKunaal is a good and happy man, he was just being funny and sarcastic with you.

Love the way you respond to your haters ❤

First time i am seeing you giving it back to hater

Earlier, when a twitter user asked how Abishek managed to get movies after 2008 film Drona which was a disaster at the box office, The reply Abhishek gave to this comment is still being lauded by his colleagues and fans.

The actor politely said that he got dropped from few films and found it difficult to get casted. “But we live in hope and keep trying, hoping and working towards our goals. You have to get up everyday and fight for your place under the sun. Nothing in life comes easy.” he said.

I didn’t. Was dropped from a few films and it was very difficult to get cast. But we live in hope and keep trying, hoping and working towards our goals. You have to get up everyday and fight for your place under the sun. Nothing in life comes easy. जब तक जीवन है , संघर्ष है।

Comment your views on these replies of the actor !!