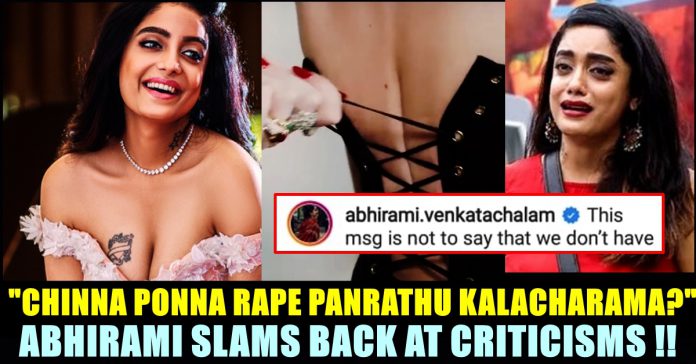 Abhirami Venkatachalam uploaded a video on her Instagram account which slammed people who are expecting a girl to be in a way they like them to be. The video which has the narration of American actress and activist Cynthia Nixon, is being lauded world wide for the powerful message it conveys.

The video highlighted how intensely women’s body is scrutinised in this world. The short video was produced for Girls Girls Girls magazine and Cynthia can be seen reciting a blog written by Camille Rainville in the year 2017 with a “Be a lady, they said” title.

“Go on a diet. Watch what you eat. Eat celery. Chew gum. Drink lots of water. You have to fit into those jeans. God, you look like a skeleton. Why don’t you just eat ? You look emaciated.” the lyrics in the video slams people for body shaming women. The video also tries to eradicate the victim blaming culture by saying “Dress modestly. Don’t be a temptress. Men can’t control themselves. Men have needs. You look frumpy. Loosen up. Show some skin. Look sexy. Look hot. Don’t be so provocative. You are asking for it”

Nixon who felt proud on being a part of making such video expressed it her official twitter account. “Proud to be involved with this powerful film that has struck a chord with so many people around the world” she wrote. Sharing this video in her official Instagram account, Tamil Bigg Boss contestant Abhirami Venkatachalam wrote “Don’t tell me how to #Bealady Spot on video ….”

Spot on video …. thank you baby @santamarialambert for sharing the video♥️

However, this post of the NKP actress didn’t go well with few of her seven lakh followers it seems. One of them asked the actress if she is warning her followers by posting the video to which Abhirami replied by saying “first person to twist the meaning of the video wow proud of you …. was expecting someone like you …. great proved me right thank you”

One more user said that what said in the video is called as “culture” in India. Abhirami who got frustrated, questioned back the Instagram user by asking about the rapes and harassments in our country.

Check out the screenshots of her other replies below :

Comment your views on the video of Cynthia and the reactions it is receiving !!