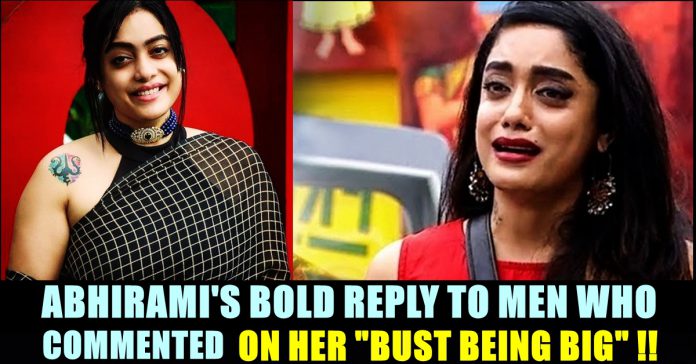 Bigg Boss fame Abhirami Venkatachalam who is pretty much active in social media platforms, came up with an Instagram story on Monday, replying to the people who commented on her “bust being being” lately. The “NKP” actress who has been condemning the online perverts through her posts, has asked them to talk something that makes sense and asked them to start looking at women with respect.

Abhirami Venkatachalam is one of the many Bigg Boss contestants who is pretty much active in the social media platforms. The model got debuted in Tamil film industry through Ajith Kumar’s court room drama “Nerkonda Parvai” which is a remake of Bollywood blockbuster “Pink”. In the film, she played the role of one of the friends of Shraddha Srinath. Having nearly 9 lakh followers in Instagram, Abhirami had uploaded 887 posts in the photo posting social media site so far.

On seeing some of her recent posts, many people seems to have commented on her body shape. In a way of shutting down all of them, the actress uploaded a picture of herself and schooled those who commented to start looking at women with respect.

“Lately I have been getting comments about my bust being big, yes it is because I am a curvy South Indian woman. I am so sorry this is one of the aspects what make us different from you men and you might have been familiar with this because you can’t come to this world without your mother” Abhirami wrote in her post.

“So before comment about sucking mine remember you sucked your mother’s first. Start looking at woman with respect” said Abhirami and added that it is a democratic country and not a shameless, manner less country. “So talk that’s sensible not non sense” she concluded her post.

Check out the screen shot of her Instagram story below :

On the professional front, Abhirami Venkatachalam who got eliminated from the third season of Bigg Boss show on 57th day, is currently busy participating in the “Murattu Singles” reality show as one of the judges. She is expected to appear in films such as Nerunji, Gajen etc.

Previous articleTamil Actress Said That She Can’t Vote This Time !! Got Thrashed
Next articleAIADMK Accused DMK Of Distributing Money Through Google Pay In 5 Constituencies !!