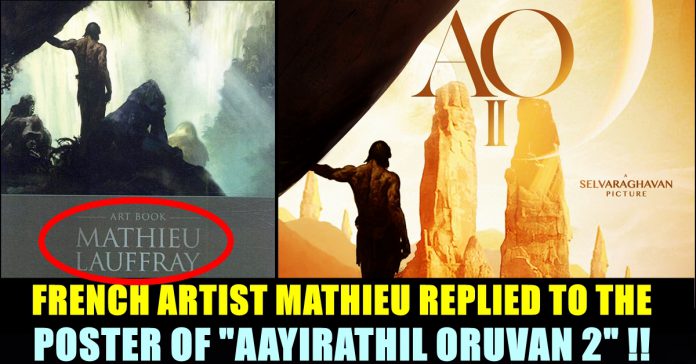 A massive announcement on the sequel of Selvaraghavan’s epic historical drama “Aayirathil Oruvan” surfaced on the special day of New year. As the film got re released in some of the prominent theatres of Tamil nadu, it garnered huge reception with fans lauding the intelligence of the filmmaker for making such a intriguing film during 2010. Many fans termed the project as “Magnum Opus” and compared it with Telugu blockbuster period film “Bahubali”.

On the new year day, director Selvaraghavan came up with a tweet and surprised his fans by confirming that Aayirathil Oruvan 2 is in cards. “இது வரை கேட்டிருந்த ,காத்திருந்த என் அன்பு உள்ளங்களுக்கு இதோ உங்கள் முன்னால்” wrote Selva and added a posted by tagging Dhanush to indicate that he is going to play lead in the film.

Through the poster, the duo announced that the film is going to hit the screens during 2024. “A magnum opus !! The pre production alone will take us a year. But a dream film from the master @selvaraghavan! The wait will be long. But we will give our best to make it all worth it. AO2 ..The Prince returns in 2024” said Dhanush in his tweet while sharing the tweet of Selva.

A magnum opus !! The pre production alone will take us a year. But a dream film from the master @selvaraghavan ! The wait will be long. But we will give our best to make it all worth it. AO2 ..The Prince returns in 2024 https://t.co/HBTXeN66iA

As soon as the poster released, fans started expressing their excitement through their reactions. However, a set of fans pointed out that the poster resembles the art of the cover picture of a book that belongs to French Art director Mathieu Lauffray.

Looking at both the posters, one can identify the similarities as only the background of the original picture was changed in the announcement poster of “Aayurathil Oruvan 2”. Netizens couldn’t keep calm as many memes, reactions and trolls surfaced regarding the plagiarism.

Hi @selvaraghavan, Hope the story of the movie #AayirathilOruvan2 is not stolen from any other movie or from any other book. Let only the idea of the poster be a stolen one. Say no to #Plagiarism @dhanushkraja. Best wishes to the team. https://t.co/wwOK0wN64i pic.twitter.com/tgoeqSwu51

Now, a fan went one step ahead and claimed that he has e-mailed the artist of the original reporting about the poster of Selva and Dhanush. Adding the tweet link of Dhanush, the twitter user named “Kannan”, claims that he sent a mail to Mathieu Lauffrey, writing “Looks like the poster art ripped your Tarzan concept art. Was it approved and available for sale?”

Here’s the screenshot of the reply :

In the comment section of this tweet, many fans tagged director Selvaraghavan’s official twitter account and demanded him to respond. However, Selvaraghavan hasn’t opened on this issue yet. Aayirathil Oruvan featured Karthi, Reema sen, Andrea, Parthiban in the lead roles. Music was composed by G.V Prakash and Dhanush sung a song for the film. Comment your views on this reply of Mathieu Lauffray !!