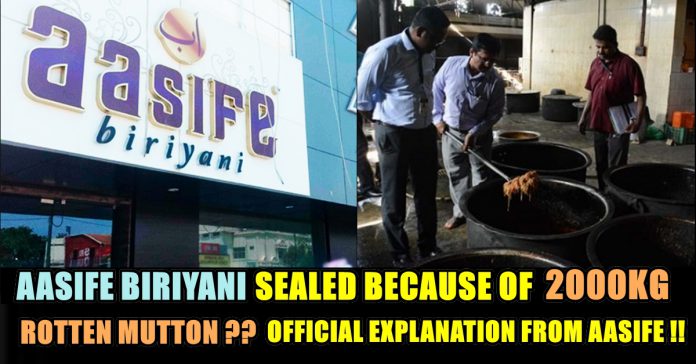 Aasife Biriyani Sealed Because Of Unhygienic Food & Environment ?? Here’s The Official Explanation From The Biriyani Centre !!

Aasife Biriyani is one of the prominent food restaurant in Chennai city which is well known for its unique taste and the Biriyani it provide is one of a kind which is always felt by the people of Chennai.

A team of officials from Tamil Nadu Food Safety Department sealed the central kitchen of a chain of restaurants, Aasife Biriyani, in Guindy on Wednesday, citing sub-standard food and unhygienic environment.

According to officials of the Food Safety Department, the central kitchen was sealed as there was no response to repeated notices issued to improve and adhere to the quality standards under the Food Safety and Standards Act, 2006.

It is from here that main dishes are prepared and transported to different outlets across the city. The building was sealed after an emergency prohibition order was obtained.

“During the visit, it was found that the kitchen was totally unhygienic. They were also using sub-standard products to cook,” an official part of the team alleged. It is learnt that the Food Safety official for Chennai district, R Kathiravan, and his colleagues have taken the step following the order of Food Safety Commissioner P Amudha.
[wp_ad_camp_1]
The officials also explained that a few samples were taken from the kitchen also found to be unsafe. “There are 19 outlets in the city. Food to all these restaurants was prepared at the sealed centralised kitchen and sent to respective restaurants,” the official added.

However, the officials added that the kitchen could be opened again by the management after overhauling it properly.
Meanwhile facebook page of the Briyani centre has released an Official statement regarding the rotten meat issue which explained about an article published in Vikatan’s online article about 2000kg rotten mutton in Aasife. They said that Aasife kitchen inspection is clearly a separate issue.

Check out their Explanation post here :
They also attached the documents which contained the article took place in Vikatan Emagazine which is about 2000 kg rotten mutton.
[wp_ad_camp_1]

This Bikini Model Is Virally Trending As Nivetha Pethuraj !! : Here’s The Complete Story Behind!!

Actress Nivetha Pethuraj, known for her movies such as Oru Naal Koothu is predominantly appearing in tamil language films, issued a strong statement against those who...

Reacting to the rumours and speculations on himself marrying a Malaysia based 23 year old woman, actor Babloo Prithviraj issued a clarification saying that...

Narendra Modi Attended The Wedding Reception Of Priyanka Chopra !! Check Out The Reactions !!

When Bollywood superstar Priyanka Chopra tied the knot to American singer-songwriter, Nick Jonas, earlier this week, the fans couldn't help but wait for the...