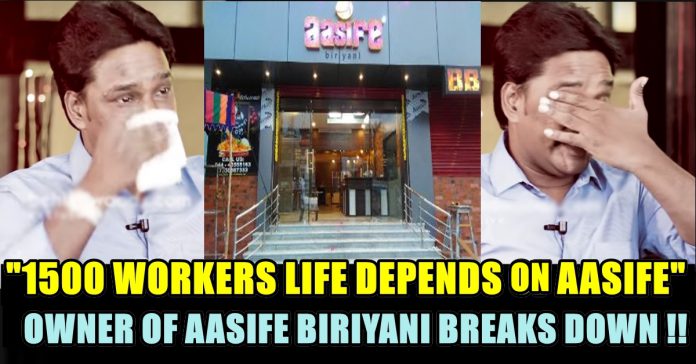 Aasife Biriyani is one of the prominent food restaurant in Chennai city which is well known for its unique taste and the Biriyani it provides is one of a kind which is felt by the people of Chennai themselves.

A team of officials from Tamil Nadu Food Safety Department sealed the central kitchen of a chain of restaurants, Aasife Biriyani, in Guindy recently, citing sub-standard food and unhygienic environment.

According to officials of the Food Safety Department, the central kitchen was sealed as there was no response to repeated notices issued to improve and adhere to the quality standards under the Food Safety and Standards Act, 2006.

It is from here that main dishes are prepared and transported to different outlets across the city. The building was sealed after an emergency prohibition order was obtained.

“During the visit, it was found that the kitchen was totally unhygienic. They were also using sub-standard products to cook,” an official part of the team alleged. It is learnt that the Food Safety official for Chennai district, R Kathiravan, and his colleagues have taken the step following the order of Food Safety Commissioner P Amudha.
The officials also explained that a few samples were taken from the kitchen also found to be unsafe. “There are 19 outlets in the city. Food to all these restaurants was prepared at the sealed centralised kitchen and sent to respective restaurants,” the official added.

However, the officials added that the kitchen could be opened again by the management after overhauling it properly.
Earlier facebook page of the Briyani centre has released an Official statement regarding the rotten meat issue which explained about an article published in Vikatan’s online article about 2000kg rotten mutton in Aasife. They said that Aasife kitchen inspection is clearly a separate issue.

In a recent video interview to Behindwoods, the owner of Aasife Biriyani, Aasife Ahmed gave a brief explanation on what exactly happened on that day. “It is known that the Biriyani in Aasife was cooked by using firewood, we never said that we are cooking in our kitchen using gas. While cooking in firewood it is natural that a kitchen would look like that. They gave us time to rectify the kitchen atmosphere and sealed the restaurant within the final day of time period. While they are entering the restaurant, it came as flash news in T V. Though we completed 90% of what they said, they sealed 2 days before the time period.”
Watch the full video here :
Source : Behindwoods
“We are planning to spread our branches world wide including London, United States, Malaysia etc. This is someone like big corporate people trying to stop us from spreading our business worldwide. I started this business in hand cart and I don’t bother on giving up this business but what my concern is my workers. 1500 workers life depends on Aasife Biriyani which is really an emotional attachment to me. I never compromised a single day in my 19 years of food business” the owner gets emotional.
He also explains how the cooking circulation works and what exactly happened on the day it was sealed in the interview. What do you think on his statements ?? Let us know by commenting below !!