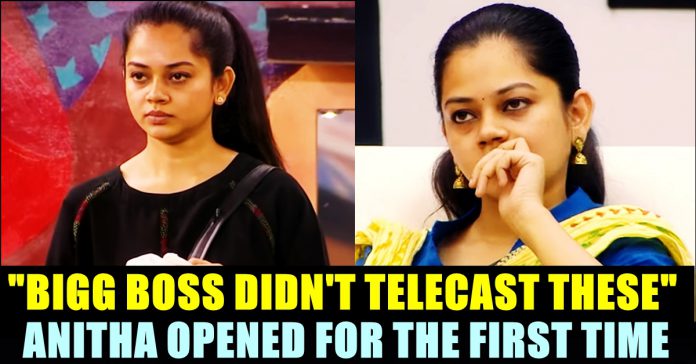 “Aari & Sanam Will Be My True Friends” – Anitha Sampath Opened

Anitha Sampath who got evicted from the Bigg Boss house, opened on her experience in the show while interacting with her Instagram followers. She revealed the details about the non-telecasted incidents that took place inside the house when she captained the house. She also talked about her bonding with Aari Arjunan, Balaji Murugadoss and Sanam shetty. To the fans who showered love and affection on her after seeing her behaviour inside the Bigg Boss house, Anitha thanked them and promised to appear in her own youtube channel.

Anitha Sampath’s father R.C Sampath passed away two days after her eviction from the Bigg Boss house. He was 62 years old and the former news reader shared about it in her official Instagram account. Anitha got evicted from the Bigg Boss house and uploaded a series of emotional stories in Instagram saying that her father had acute ulcer and died due to age factor. She said that her father couldn’t eat for two days and made it clear that he didn’t die due to heart attack.

Now, days after the regretful incident, Anitha started interacting with her followers regarding her Bigg Boss stint. Talking about the incidents that didn’t find place in the episodes of Bigg Boss show, Anitha said that she initiated a special task while being a captain. She informed her followers that she spoke on each topic daily and made her co-contestants talk about it when she captained the house.

“When i was the captain.. Each day i spoke on each topic which was not telecasted.. i made the other contestants speak too. Let me tell u what those topics are.. Monday-women n child rapes Tuesday- transgender upliftment Wednesday-beggerless state Thursday-farmers n agricultural Friday-widow remarriage Regarding Tuesday topic i have a plan which l’ll talk to you guys soon once iam OK.. Need some volunteers for that.. hope u guys will join me.. let’s start that by Feb.” read the Instagram story of Anitha.

Anitha confirmed that the verbal spats that took place inside the Bigg Boss house would end inside the same place. “Rio and me had a very good brother, sister bond in the first week.” said Anitha and added that Rio’s wife Shruthi called her to console after her father’s demise.

“This is what life is all about. What you guys are seeing inside the Bigg Boss house are illusion. All of us will be united after Bigg Boss show. Vijay TV kondattam show is nearing. We all will forget the fights and will be laughing about the things we fought over. Hopefully” Anitha said to one of her fans.

While replying to a follower, Anitha opened on how she felt when she came to known about the demise of TV actress Chithra. “I was too shocked when I heard this news on the day I came home, nerla pathathu illa but really heart breaking to hear that” she said.

Check out some of the other replies below :

Anitha got officially evicted as the 10th contestant from the Bigg Boss house. Her eviction came in as a shock to the viewers as contestants such as Aajeedh, Somashekar were still playing the game without getting evicted despite of doing nothing significantly in these 84 days.

“I initially thought that I would get evicted from the house within 2 weeks. Staying this longer in this house matters a lot to me and I wished to celebrate new year with my husband and family.” said Anitha while getting evicted and encouraged the working women to be believe in themselves. “I myself is a big example for you all. Don’t lose hope and your life will change one day” she provided courage to the women.

Director Vinoth Opened About Trimming Scenes From “Valimai” For The First Time!!

Director Vinoth, "Valimai" of whom released recently in theatres, appeared in an interview for all India radio channel and shared about many aspects of...

Vignesh Shivan To Produce Nayanthara In Her Next !! Check Out Who Directs !!

Nayanthara, who is basking in the success of her films such as , seems to have taken some time off and flown to the...

Darbar released in theatres recently and is running successfully in theatres so far. Since the release, the film found itself amidst so many controversies....