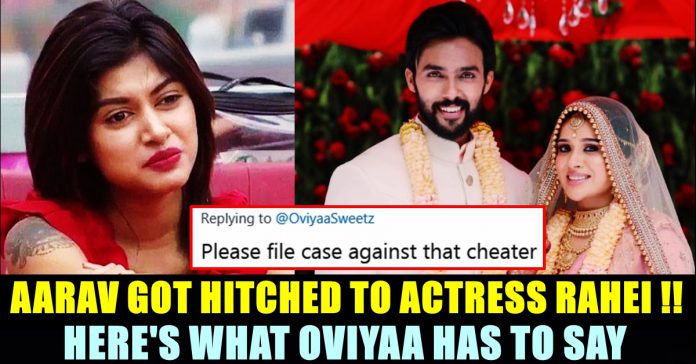 Sources reported that Aarav and Raahei knew each other for almost a year now and the two decided to get married post their parents approval. Celebrities who attended the marriage event, happily shared the pictures in their respective social media platforms. “Dear ARAV & RAHEI Congratulations❤️❤️So happy to celebrate this day with you both❤️❤️ Best wishes for a fun filled future together❤️❤️ we both love you hugs & kisses❤️❤️” Suja Varunee wrote in her post whereas Bindu Madhavi wrote “Mere dosth ki Shaadi hai….”

Yayyyyyyyyyy 🥳 My best friend got married @actorarav 💖 I was eagerly waiting for this day to welcome Raahei into our family :’) I’m so so glad this happened ! And for the true soul you are, you deserve only the best arav :’) Happy Happy married life 🤝 Wishing you both only fairy tale now, then and forever ✨ @actorarav raahei Thank you for such memorable pictures @ranjitmahendran 💯 #dostkishaadi #marriage #arav #raahei #aravwedsraahei #happymarriedlife #bestfriend #fairytale

Meanwhile, followers of Bigg Boss season 1 raised eyebrows on seeing the absence of Oviyaa in the event. It is very well known that the duo had a special bonding between each other during their stint in Bigg Boss season 1. Many social media users questioned about Oviyaa’s whereabouts. To one of a follower who asked such question, Suja replied by saying that she will be in her home.

Not many days ago, Oviyaa posted a cryptic message in her social media account, writing “Those we love never go away!they walk beside us Unseen,unheard but always near,so loved, so missed but always so very dear”

Those we love never go away!they walk beside us Unseen,unheard but always near,so loved, so missed but always so very dear 🤗

Many of her followers are reacting to this post now, believing that she would have posted this tweet only after knowing about her BB co-contestant’s marriage ceremony.

I get it why you said this today. be cool and happy as you are always and forever 💌❤️

Please file case against that cheater

On the work front, Aarav is waiting for his “Raja Bheema” to get released whereas Rahei is waiting for her debut film “Joshua Imai Pol kaaka” to be released. Oviya is currently committed in a number of OTT projects !!