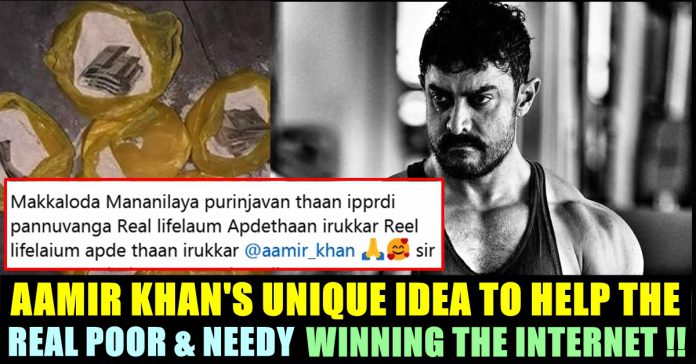 Actor Amir Khan whose works speaks for himself, is very much known for presenting meaningful movies unlike other top actors in Indian cinema. He has been consistently addressing many social stigmas through his movies. His films such as PK, Dangal are primary examples for the actor’s hard work and for his intention to make sense through films.

Now, in helping the poor and needy in this lockdown situation, the actor went one step ahead of all the celebrities who provided crores of money to PM and CM cares. Not having the slightest idea of when and how it is going to reach the people of our country, we could see the fans of actors involving in debates to prove their favourite star has donated more. Now, this unexpected gesture from Aamir Khan made everyone to think for a second.

The actor applied his “Perfectionist” mind in helping the poor and needy by not doing a regular donation. Initially the actor announced that he will be donating a packet of 1KG wheat for people as his contribution to those who are financially suffering due to this unplanned lockdown. A Tamil daily has reported that the donation of the “Ghajini” actor was ignored by many as it is very less comparing to what others are offering. But a surprise was waiting for those who didn’t refuse to receive the 1 KG wheat.

The actor actually sent out a truck filled with wheat flour packets weighing 1 KG by hiding an amount of RS. 15,000 in it. The intention behind this donation is to make sure people who are in actual need of food and money getting this financial help. People who are actually suffering in this situation won’t refuse to receive food items, no matter how less the quantity is. However, there’s no official confirmation on the news yet but if it’s true, the actor deserves respect for his thoughtful gesture.

Aamir Khan's unique way to help the needy /poor. Aamir filled a truck with bags of flour and went to a slum locality and called people from homes and said that only 1 kg of flour will be available…
Those who really in need of only 1 kg of flour, they came and accepted it ❤ pic.twitter.com/HB1DmngoJv

Users of social media started praising the actor for his heart which goes out for the poor. Check out some of their reactions :

Many Superstars came forward to help the government in this Corona outbreak. Akshay Kumar donated Rs.25 crores to the PM cares which is the highest by any actors in India. Followed by him many other actors including South stars contributing to the government and people with money and essentials.

Previous articleGayathri Raguramm Questioned Actor Suriya About His Promise Given In 2018 !!
Next articleJUST IN : Suriya Released Press Note Regarding His Wife’s Speech !!

Youth Proposed To Khushbu On Seeing Her Massive Transformation!! Here’s How She Replied

The South Indian actress who turned into an active politician replied to a comment posted on her recent photograph on Twitter. Her weight loss...

In the beach of Mahabalipuram, Chengalpattu, a sand sculpture of 160 feet tall was built for Tamil nadu cheif minister Edappadi K Pazhaniswamy. Pictures...

“I Kissed Him & That Was Not In Script” – Famous Heroine Confessed !!

Hollywood actress Margot Robbie who is known for making her presence in films such as "Once Upon A Time in Hollywood",  "Focus",  " Wolf...