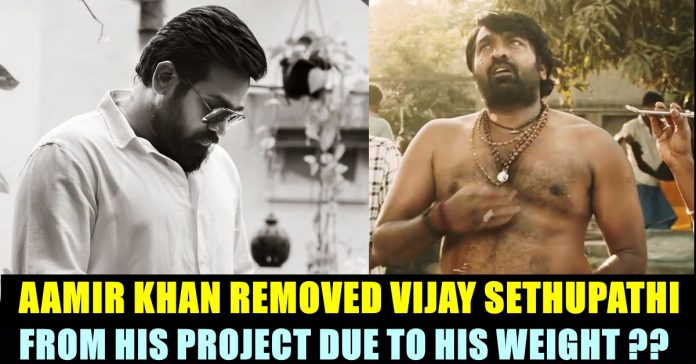 Vijay Sethupathi, one of the busiest actors in Kollywood film industry, is currently concentrating on doing more films in other language films. His recently released Telugu film “Uppenna” has became the talk of the town as the actor has played antagonist role in the film. He also got committed in a couple of Bollywood films and a recent report has emerged saying that the actor got opted out from Aamir Khan’s upcoming film “Laal Singh Chaddha” due to his physique.

The film which is an official remake of Hollywood epic coming of age drama “Forrest Gump”, took break from being produced due to the outbreak caused by the COVID 19 virus. It is reported that Vijay Sethupathi was supposed to take part in the shoot for the film during the summer of 2020.

Earlier, reports suggested that Vijay Sethupathi was going to do the role of “Benjamin Buford “Bubba” Blue” in the 1994 flick. Originally played by Mykelti Williamson, the role is the protagonist’s best friend whom he meets in the U.S. Army, where their platoon is ambushed and Bubba is killed. Before they are sent off to Vietnam, Bubba convinces Forrest to join him in pursuing a shrimping business after they finish their service, a promise that Forrest keeps.

For the Indian version, the makers decided to cast Vijay Sethupathi as a Tamilian who meets Lal singh Chaddha. However, the “Master” actor who is known for showing interest in doing films that consists ensemble casts, reportedly got opted out from the project due to his physique.

Aamir Khan who always expects everything to be “Perfect” in his projects, did a major body transformation for his film “Dangal”, got disappointed after learning that Vijay Sethupathi had put on weight. The report of Times of India suggests that “Makkal Selvan” was supposed to be in shape for his role in the film but he failed to do so which made the Bollywood star quite upset.

The report further suggests that Aamir Khan opted himself out from the Hindi remake of “Vikram Vedha” as he didn’t want to reprise the role played by Vijay Sethupathi. However, the most recent report of India Today has updated that Vijay got busy with other projects which he had committed prior COVID 19 outbreak and requested Aamir Khan if he could find another suitable actor for the same role.

A number of twitter users started complaining about the excess number of advertisements that are being displayed during the streaming of Vijay Sethupathi starring...

Actor Vijay’s Surprise Gift To Santhosh Narayanan On His Birthday !! : Unexpected From The Actor !!

Composer Santhosh Narayanan, who made his debut in Kollywood in 2012, has carved a niche for himself in a short span of time. In his...