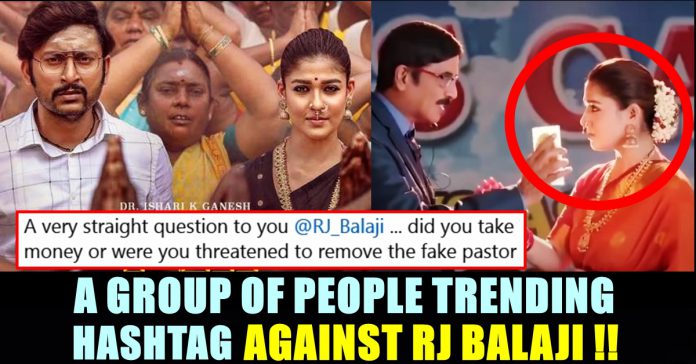 For removing a scene that was released as a sneak peek for , a separate set of people are trending hashtag against RJ Balaji, director and writer of the movie. They are accusing Balaji of being biased against a particular community in his film which was made to expose the fake God men in our country. For deleting a scene that trolled the priests of Christian community, hashtag #பாவாடைபாலாஜி_பரிதாபங்கள் is trending in the micro blogging social media site.

Mookuthi Amman of Nayanthara and RJ Balaji got released in Disney plus Hotstar on 14th of November. The film’s plot revolves around a small time journalist meeting Mookuthi Amman, a Hindu religious god to make people realize the truth behind the fake godmen of our society. Despite of the mediocre making and predictable screenplay, the film is received positive reviews from the people for the core message it carried.

Directed by R.J Balaji and Saravanan, the film featured Nayanthara in the title role, with Balaji, Urvashi, Moulee and Ajay Ghosh in supporting roles. The film was produced by Ishari K. Ganesh under Vels Films International. Balaji described Mookuthi Amman as having “all the elements that were there in the devotional films that we grew up watching.” He said it would be “a nostalgic trip, but there will also be a takeaway that is relevant, especially in this present times” without satirising the genre.

Critics praised the performance of Oorvashi and the comedy scenes but criticized the uneven direction and screenplay. Now, month after the film’s release, a group of people trending hashtag against RJ Balaji for not adding a scene that release as a sneak peek.

Prior release, The “Mookuthi Amman” team released a particular clip of the movie in youtube as “sneak peek” to promote the film. The scene showed actor Manobala as a church’s priest and trolled the way how he is selling a CD cassette to people by performing fake gimmicks. Mookuthi Amman (Nayanthara) enters the hall and could be seen warning him for cheating people. “Jesus is my friend, your tricks must have pissed him off. I will send you to the hell” Mookuthi Amman would warn the fake priest.

Due to unknown reasons, this scene didn’t take place in the film and it was deleted from the official youtube channel as well. Now, after a month, a group of people who belong to Hindu religion are slamming Balaji for removing the scene from the movie.

Check out some of the tweets under the hashtag #பாவாடைபாலாஜி_பரிதாபங்கள் below :

This is so true. Why is it that such films are not being questioned for mocking and taking sides? #பாவாடைபாலாஜி_பரிதாபங்கள் pic.twitter.com/I4JhzyM7ur

A very straight question to you @RJ_Balaji … did you take money or were you threatened to remove the fake pastor scene which you had in the trailer and removed it in the movie?#பாவாடைபாலாஜி_பரிதாபங்கள்@HLKodo @Avvaitweets @cosmicblinker pic.twitter.com/mnlEYVr4sX

Why are Hindus not united in one voice against such movies that blatantly insult our religion? This is something we all should seriously think about and resolve.#பாவாடைபாலாஜி_பரிதாபங்கள்@BS_Prasad @shivaji_sha https://t.co/Elhn31twjF

#பாவாடைபாலாஜி_பரிதாபங்கள்
Bitter truth about Balaji and some people like him😡 pic.twitter.com/TmaLeqVCy9

Let us spread this message to all
……nobody should take a film like this in future. #பாவாடைபாலாஜி_பரிதாபங்கள் pic.twitter.com/JrYss1cvWK

How unjust Nayan? On the one side visiting Hindu temples with @VigneshShivN
On the flip side, doing a film like #MookuthiAmman#மூக்குத்திஅம்மன். You have hurt the sentiments of millions of your Hindu Fans Nayan. Very bad! #பாவாடைபாலாஜி_பரிதாபங்கள் pic.twitter.com/vhpv4z9RjZ

Shame… whichever way you do.. Learn to respect and value people's emotions and feelings. Pls don't sell yourself for cheap publicity and rating. Didn't expect this from you. #பாவாடைபாலாஜி_பரிதாபங்கள் pic.twitter.com/FX12mzT8SP

#பாவாடைபாலாஜி_பரிதாபங்கள்
May Maa Kaali teach this gang & their families lessons that wont ever be forgotten. https://t.co/ILJmh5rYWV

Previous articleRajinikanth Fans Got Disappointed On Kamal Haasan !! Check Why
Next articleAranthangi Nisha’s First Post After Getting Evicted From The Show !!

With the most expected "The Gray Man" is nearing its release in "Netflix" platform, cast of the "Russo Brothers" directorial are busy promoting the...

A day before the biggest event of Tamil nadu politics, online fans of Superstar Rajinikanth are expressing their dejection over their idol not taking...