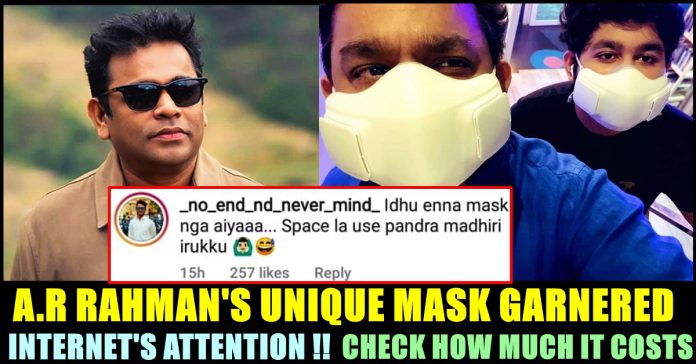 Academy award winning Tamil nadu based music director A. R Rahman created awareness among his social media followers and public by uploading a selfie picture of himself and his son post vaccination. “Vaccinated #1stjabdone💉 #covishield have you?” Rahman’s caption for the post read whereas his son and emerging singer A. Ameen uploaded the same picture and wrote “vaccinated” as his caption.

Many celebrities from entire Indian film industry has been influencing people to get vaccinated at the earliest to prevent the spread of the virus. A.R Rahman, one of the most followed icons of Indian art medium, joined the list from Sunday. His post garnered 3 lakh plus likes in no time with thousands of reactions from his fans and followers.

Meanwhile, many of the people who came across the posts of Rahman and Ameen, wondered what the father and son duo were wearing in their face instead of a regular face mask. “What kind of mask is this ? Looks like something that is used in space” commented a follower whereas another one said “Where did you get that mask sir 😂”

A mask by shankar 🔥

What is this mask??? lookalike designed by alien 🤔

Many of them also predicted the worth of the mask and one of them, in a lighter note said that it could worth a crore. However, it has been reported that the mask Rahman and his son were wearing is named ‘LG PuriCare™ Wearable Air Purifier’. It reportedly designed based on extensive facial shape analysis, and fits snugly on the user’s face to minimize air leakage around the nose and chin. Each of those masks costs between Rs. 14,000 to Rs. 18,000.

Previous articleWATCH : Top Heroines Got Stunned On Seeing This Unseen Video Of Samantha !!
Next articleKollywood Heroine Replied To The Inappropriate Questions Of Her Followers !!