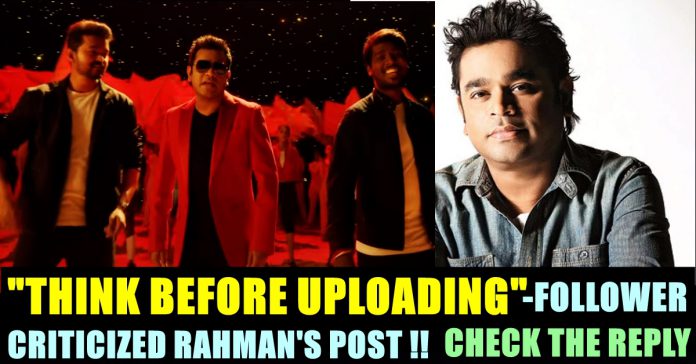 A.R Rahman who is pretty much active in social media platforms, recently came up with a hilarious video in his official Instagram account asking his followers about the maker of the video meme. The video meme showed the video of one of the Nooran sisters singing a song in a loud manner and the meme created interpreted it as people who were sleeping getting scared of it with animals running away. Many celebrities got surprised on seeing A.R Rahman sharing a video meme for the first time and expressed their excitement in the comment section of the post whereas a follower criticized it. Rahman, as always, replied to him without losing his nerves.

Being the only Indian musician to win the academy award, A.R Rahman is known for his cool and composed attitude. His calm attitude even after winning Oscar twice, is world famous. He is one of the most loved musician in the world and the people of Tamilnadu are very proud on the fact that he works predominantly in Kollywood industry. Having composed for Atlee-Vijay’s “Bigil” recently, the composer is being lauded by the fans for the music music he making throughout his career.

The musician is pretty much active in social media platforms lately. He who enjoys 48 lakh followers in Instagram, recently came up with a video in the photo/video posting social media site and tried to identify a meme creator. The video showed one of the nooran sisters scaring people and animals by singing a song in an aggressive manner.

Sharing the video, Rahman asked “Who edited this ?? 😀 What a crazy interpretation!”

Meanwhile, a follower named as Simranjith Malhi came up with a reply criticizing Rahman for sharing the video. He who said that the singer has a nice voice, demanded Rahman to think before uploading the video and remembered Rahman that he is also from the same stream. “She has great voice… think u have to think abt before upload dis vdo. Even u also from same stream” his reply read.

On the work front, Rahman is all set to give tream to the audience with his music through films such as “Ayalaan”, “Paththu Thala” and many others. Comment your views on this reply of the musician !!

Previous articleP.A Arumuga Nainar Appointed As A Joint Secretary Of All India MGR Mandram !!
Next article“Can We Move On, Please ??” Shruthi Haasan On Her “Nose Surgery” !!

Weeks ago, Rajesh who worked as driver in Chennai city killed himself because of the intolerance of abusive language from Chennai Police officers. Following...