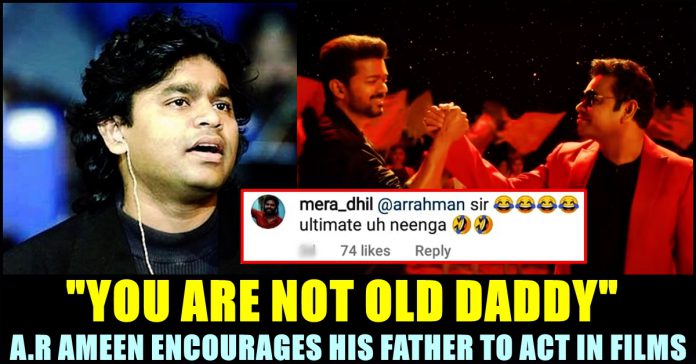 A.R Rahman’s Reply To A Fan Who Wanted Him To Act In Films Wins Internet !!

Legendary musician A.R Rahman made a subtle yet hilarious reply to one of his Instagram followers who wanted him to make his acting debut. The music composer replied back to the fan, saying that the fan is trying to ruin the peace of his old age in a humorous manner. The reply made by him garnered huge attention among fans and has been grabbing headlines across the Tamil media portals. Interestingly, Rahman’ s son A.R Ameen made a loveable reply to his father’s comment as well.

Being the only Indian musician to win the academy award, A.R Rahman is known for his cool and composed attitude. His calm attitude even after winning Oscar twice, is world famous. He is one of the most loved musician in the world and the people of Tamilnadu are very proud on the fact that he works predominantly in Kollywood industry. Having composed for Atlee-Vijay’s “Bigil” recently, the composer is being lauded by the fans for the music he has been making throughout his career.

The musician is pretty much active in social media platforms lately. He who enjoys 55 lakh followers in Instagram, came up with a video from one of his Bollywood films named “Mimi” recently. Tagging actress Kriti Sanon and other producers and technicians, the composer wrote “Coming soon” as his caption.

The post garnered huge reception among fans with various kind of reactions pouring through the comment section. On seeing Rahman himself appearing in the video, a follower named Sanjeev had the courage to ask Rahman when he is going to make his acting debut. “Sir when can we expect your acting debut ? 😎😎” Sanjeev asked and his commented garnered wide reach with1000 plus likes and also grabbed the attention of the Oscar winner himself.

He who is known for casually interacting with his online followers, came up with a reply saying “you don’t want me to grow old peacefully”

As you can see, the reply of Rahman received 7K plus likes from his followers. It didn’t end there as A.R Ameen, son of the legendary musician came up with a cute reply to shower love on his father. “You are not old daddy, we all love you” Ameen said to his father who celebrated his 54th birthday of January 6 2021.

“Sir, it will be really great if you act, at least a cameo” a follower said on seeing Rahman’s comment whereas another fan wrote “Love your sense of humour. Thank you for your music. GOAT” as his comment. Check out some such reactions that surfaced for Rahman’s cheeky reply :

It is notable that Rahman gave a glimpse of himself for the song “Singapenne” in Vijay’s “Bigil”. Comment your views on Rahman who recently made his debut as writer through “99 songs”, making his presence on screen for a whole movie !!

Previous articleOlympics Got Thrashed By Fans For Completely Ignoring India !!
Next article“Simbu Must Have To Give His Salary To Me” – “AAA” Producer Opened About The Red Card Issue !!

Actress Jyothika has made her entry to Instagram on 31.08.2021. As her first post, Jyothika has shared her photos from her trip to the...