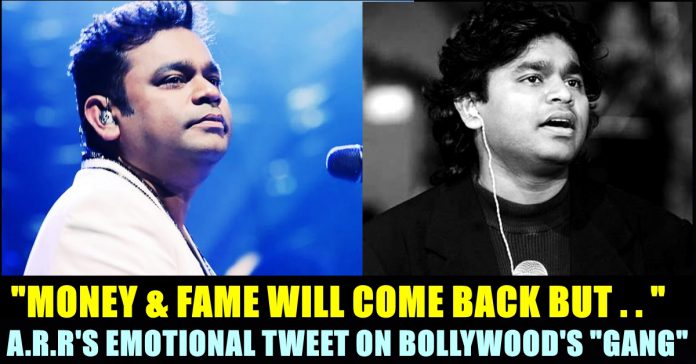 Replying to a tweet of Director Shekhar Gupta who said that A.R Rahman’s Oscar awards proves that he has more talent than the Bollywood industry, the music maestro posted a reply saying that time never comes back. The musician visibly expressed his disappointment on those people who made him miss the opportunities in Bollywood film industry by spreading rumours during his prime time.

Several people in film industry started reacting to a statement made by Rahman in a recent interaction regarding the “Gangsim” that worked against him. Shekhar Gupta who is known for making films such as Mr.India, New York, I Love You, Passage, also posted a tweet motivating the 53 year old musician. “You know what your problem is Ar Rahman ? You went and got #Oscars . An Oscar is the kiss of death in Bollywood. It proves you have more talent than Bollywood can handle ..” Shekhar said in his tweet.

You know what your problem is @arrahman ? You went and got #Oscars . An Oscar is the kiss of death in Bollywood. It proves you have more talent than Bollywood can handle .. pic.twitter.com/V148vJccss

In a recent interaction with Radio Mirchi, A.R Rahman said that there are some people in Indian film industry who doesn’t want him to work for more number of Bollywood films. A.R Rahman won two Oscars for “Slumdog millionaire” which was released in the year 2008. He is the only Indian technician to grab the International award.

Known for his humbleness, A.R Rahman always stayed away from controversies in his cinema career which spans more than 28 years. His calm attitude even after winning Oscar twice, is world famous. He is one of the most loved musician in the world and the people of Tamilnadu are very proud of the fact that he works predominantly in Kollywood industry. However, the main reason behind the musician working for less number of movies in Bollywood industry for past few years has been revealed by himself in a show named as Radio Mirchi’s weekly top 20 celeb special show.

In the past decade, Rahman has done multiple Tamil films but in comparison, fewer Bollywood movies. Radio Jockey Suren of Radio Mirchi asked Rahman why he is not working for more movies in Bollywood while talking about the musician’s “Dil se”, Swades”, “Guru”, “Rockstar”, “Tamasha” and “OK Jaanu”. Answering to his question, Rahman said that there is gang within the industry spreading false rumours against him which he believes as a main reason for the less work of him in Bollywood for past recent times. “I don’t say no to good movies, but I think there is a gang, which, due to misunderstandings, is spreading some false rumours” said Rahman.

The “Roja” musician went to narrate about an incident that took place recently between himself and Mukesh Chabbara, director of recently released “Dil Bechara”. Rahman said that he gave Mukesh four songs in two days. He told me, “Sir how many people said don’t go, don’t go to him (A.R Rahman) and I realized, yeah okay, now I understand why I am doing less work in Hindi films and why the good movies are not coming to me. I am doing dark movies, because there they are doing harm”.

He further added, “People are expecting me to do stuff, but there is another gang of people preventing that from happening. It is fine, because I believe in destiny, and I believe that everything comes from God. So, I am taking my movies and doing my other stuff. But all of you are welcome to me. Makes beautiful movies, and you are welcome to come to me” the musician said in that interview.

Now, replying to Shekhar Kapoor, Rahman said that money and fame can be earned back if lost, but the wasted prime time can never come back, he worried. However, Rahman who wanted to spread peace, said he will move on as he has greater things to do. “Lost Money comes back, fame comes back, but the wasted prime time of our lives will never come back. Peace! Lets move on. We have greater things to do” read the tweet of him.

Lost Money comes back, fame comes back, but the wasted prime time of our lives will never come back. Peace! Lets move on. We have greater things to do😊 https://t.co/7oWnS4ATvB

Previous articleABVP President & Doctor Shanmugam Accused Of Harassing Woman In Chennai !!
Next articleMalavika’s Sassy Replies In Twitter Wins The Heart Of Her Fans !!

India lost for the first in the world cup tournament against England in their last league game. Unable to chase 300+ target, India lost...

After facing criticism  from former Union Health Minister Anbumani Ramadoss for holding a cigarette between his lips in the poster of Sarkaar, actor Vijay has...