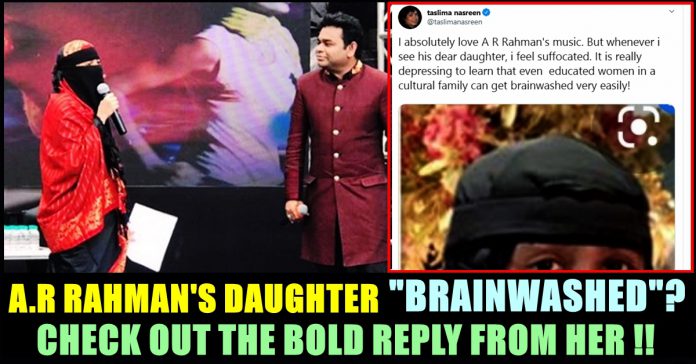 Muslim women wearing burqa always been a subject to debates and criticisms. Even A.R Rahman’s daughter is no exception it seems as she got criticized for posing with burqa in one of a picture. Taslima Nasreen, a popular Bangladesh-Swedish writer posted a twitter post criticizing Khatija Rahman for wearing burqa in public.

She said that she loves A.R Rahman for his music but feels suffocated whenever seeing his daughter. She added that it is depressing to see a girl from an educated and cultural family getting brainwashed so easily. “I absolutely love A R Rahman’s music. But whenever i see his dear daughter, i feel suffocated. It is really depressing to learn that even educated women in a cultural family can get brainwashed very easily!” read the tweet of the feminist.

I absolutely love A R Rahman's music. But whenever i see his dear daughter, i feel suffocated. It is really depressing to learn that even educated women in a cultural family can get brainwashed very easily! pic.twitter.com/73WoX0Q0n9

Khatija, daughter of Academy award winning music director A.R Rahman replied to Taslima through her Instagram post. She, in a way of giving Taslima a fitting reply, asked her to google what true feminism is. She schooled Taslima by saying that bashing another woman and bringing her father into the issues is not feminism. “My work will speak. I don’t wish to say anything further” said Khatija after making it clear that she is not regretting her choices. “Dear Taslima Nasreen, I’m sorry you feel suffocated by my attire. Please get some fresh air, cause I don’t feel suffocated rather I’m proud and empowered for what I stand for.” read her post.

Been only a year and this topic is in the rounds again..there’s so much happening in the country and all people are concerned about is the piece of attire a woman wants to wear. Wow, I’m quite startled. Every time this topic comes the fire in me rages and makes me want to say a lot of things..Over the last one year, I’ve found a different version of myself which I haven’t seen in so many years. I will not be weak or regret the choices I’ve made in life. I am happy and proud of what I do and thanks to those who have accepted me the way I am. My work will speak, God willing.. I don’t wish to say any further. To those of you who feel why I’m even bringing this up and explaining myself, sadly it so happens and one has to speak for oneself, that’s why I’m doing it. 🙂. Dear Taslima Nasreen, I’m sorry you feel suffocated by my attire. Please get some fresh air, cause I don’t feel suffocated rather I’m proud and empowered for what I stand for. I suggest you google up what true feminism means because it isn’t bashing other women down nor bringing their fathers into the issue 🙂 I also don’t recall sending my photos to you for your perusal 🙂

Followed by this she took sly dig at Taslima in her next posts. In one of her post Khatija posted a picture of herself with her father and sister. In the post, Rahima, younger sister of Khatija was seen not wearing a burqa. Khatija posted it only to make it clear that wearing burqa is her very own choice.

Comment your views on these befitting replies of Khatija !!

Previous article“Why Should I Take The Blame Of A Movie’s Failure?”- Official Video Of Ajith Released !!
Next articleRavichandran Ashwin’s Reply To Troll Won Hearts !!

“Arabic Kuthu” Fame Jonita Gandhi To Debut As Heroine In This Film !! Check Who Plays The Male Lead

Singer Jonita Gandhi who rose fame among the mainstream audience after appearing the lyric videos of Anirudh Ravichander's "Chellamma Chellamma" from "Doctor" and "Arabic...