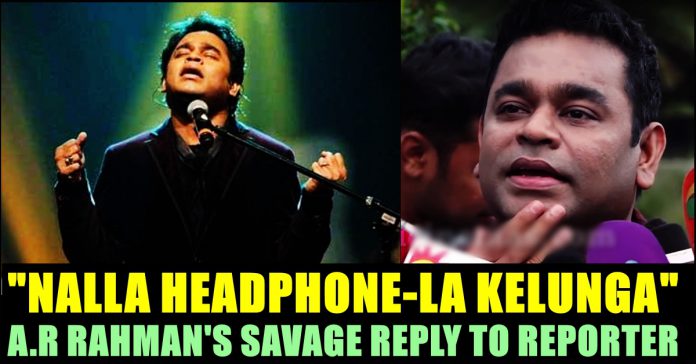 A.R Rahman who is not very much active in interacting with press and media, has conducted a press meet for most probably the first time. He met press to announce about his “T Futures”, a collaborative culture project that would curate and celebrate the sounds of Tamilnadu.

A.R Rahman is one of the most loved musician in the world and the people of Tamilnadu are very proud on the fact that he works predominantly in Kollywood industry. The composer’s recent work was actor Vijay’s Bigil and the composer lauded by the fans for the songs and Background score in the film.

Sharing about the “Ta futures”, Rahman said that the whole project belongs to the people. Collaborating with filmmaker Bharat Bala and Tod Machover, a musician who is known for his experiments in musical industry, Rahman said that “Ta” would focus on the culture of Tamilnadu. “It concentrates on the knowledge and interests of the children. As they are learning in every aspect nowadays, “Ta” is an collective conscious in nurturing them” said the Oscar winner.

“As the whole world is occupied with negative energy such as war, children should not be under such circumstance. Only if their mind gets piece, they would become a scientist or a musician or a politician. We wish to create such environment” said Rahman who received questions after questions from the reporters regarding his initiation.

Meanwhile one of a reporter went off the topic and asked Rahman why movie songs are dominated by loud music unlike the old good songs of Kannadhasan and M.S Vishwanathan. “In old days, musicians prioritized lyrics while composing a song. But nowadays, we couldn’t hear the lyrics as music occupies a whole song. Is it not a recession for Tamil language and songs ??” the reporter asked to which Rahman answered with a smile.

The musician asked the reporter to buy a good system with quality headphones to hear the lyrics of songs which left the people present there in splits. Further he said that not all song are composed that way. “Few songs are very much audible. But some songs are composed with a different intention. They are composed in order to choreograph dance steps and to engage the audience in theatres. We should not see it with a narrow mind” explained the composer to the reporter.

When one more reporter asked Rahman to give statement regarding the problems that are taking place in the country, he simply laughed and ended the press meet by saying “Ellaa Pugazhum Iraivanukke”. Rahman’s film-scoring career began during the early 1990s with the Tamil film Roja. Among Rahman’s awards are six National Film Awards, two Academy Awards, two Grammy Awards, a BAFTA Award, a Golden Globe Award, fifteen Filmfare Awards and seventeen Filmfare Awards South. He has been awarded the Padma Bhushan, the third highest civilian award, in 2010 by the Government of India.

What do you think on these replies from the Maestro ?? Comment your views !!

Previous articleGirl Wearing Mask In JNU Attack Is A Student ??
Next articleAjith Acted In This Movie Of Him Without Belief !! WATCH !!