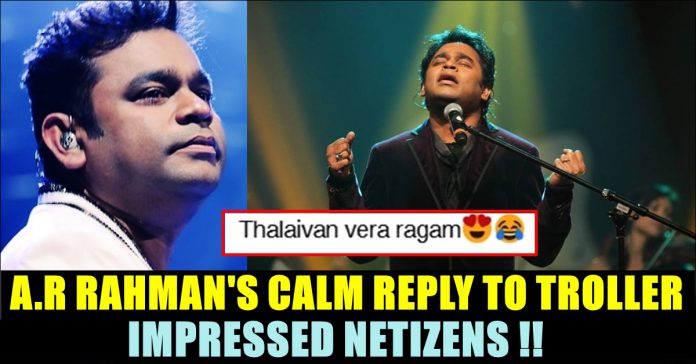 Being the only Indian musician to win the academy award, A.R Rahman is known for his cool and composed attitude. His calm attitude even after winning Oscar twice, is world famous. Now his reply to one of his follower who tried to troll him, is being lauded by the users of social media.

A.R Rahman is one of the most loved musician in the world and the people of Tamilnadu are very proud on the fact that he works predominantly in Kollywood industry. Having composed for Atlee-Vijay’s “Bigil” recently, the composer lauded by the fans for the songs and Background score in the film. As we all know he is not very much active in social media and he doesn’t reacted to trolls much in the past.

This tweet from the musician received large number of response from his followers and one of his follower had the courage to troll the musician through his comment. He asked whether the release is happening in 2050, in a way of mocking the tweet of Rahman to which Rahman simply replied with a replying “Today” with a smiling emoji.

This reply from Rahman indeed impressed his followers for replying to a troll in a most positive way unlike other celebrities who would slam their trollers back. Few even said that this is an apt way to troll back trollers to make them realize their mistake.

Check out some of the reactions for Rahman’s reply :

On the work front, A.R Rahman is about to work for the project Dil Bechara of Sushant Singh Rajput. What do you think on the way Rahman handled the troller ?? Comment your views !!

Previous articleMugen Rao Posted Cozy Pictures With His Girlfriend !! Abhirami Reacts
Next articleTrisha Reacts On The Growth Of Sivakarthikeyan !! WATCH

Director Parthiban Wants To Hurt Himself With Slippers !! SHOCKING REASON !!