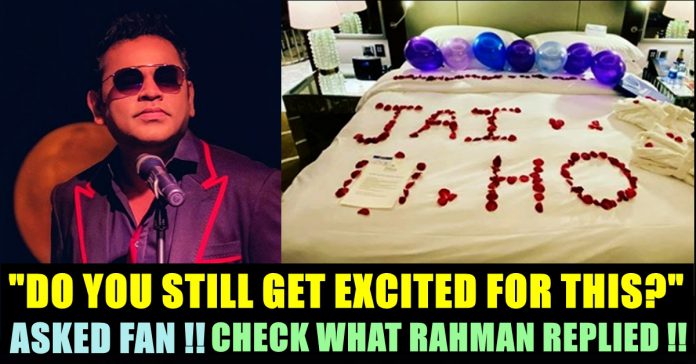 A.R Rahman is one of the most loved musician in the world and the people of Tamilnadu are very proud on the fact that he works predominantly in Kollywood industry. Having composed for Atlee-Vijay’s “Bigil” recently, the composer lauded by the fans for the songs and Background score in the film.

Now the Oscar winning musician from India has performed a live concert in Dubai, United Arab emirates. Being the only Indian technician to work on several International projects such as Lord of the rings, A.R Rahman performed a huge concert in Dubai. The concert took place at Coca-cola Arena in Dubai and a massive crowd attended the show, according to sources.

Now the composer has shared a picture of his hotel room in his official Instagram account. The picture showed his bed decorated in Jai Ho with rose petals and balloons were visible in the picture. He shared the picture with a caption saying “Hilton’s welcome last night!”

A.R Rahman has more than 34 lakh followers in Instagram whereas one of them asked Rahman whether he is getting excited for these kind of surprised. “✨💓 do you still get xcited ?? For such welcome !!!? That’s so sweet :)” read the comment of the user.

This comment grabbed the attention of the music composer who took time to reply for the user by writing “kindness should be acknowledged ..My prayers and love to all the kind human beings in the world ♥️😊🌹”

Check out the screenshot of the conversation here :

This comment from Rahman won the heart of many of his followers for his humble gesture. This concert of the musician included the participation of Benny Dayal, Jonita Gandhi, Ranjith Barot, Javed Ali, Andrea Jeremiah, Haricharan, Shwetha Menon and Alphons Joseph.

Rahman’s film-scoring career began during the early 1990s with the Tamil film Roja. Among Rahman’s awards are six National Film Awards, two Academy Awards, two Grammy Awards, a BAFTA Award, a Golden Globe Award, fifteen Filmfare Awards and seventeen Filmfare Awards South. He has been awarded the Padma Bhushan, the third highest civilian award, in 2010 by the Government of India.

What do you think on this humble gesture of A.R Rahman !!