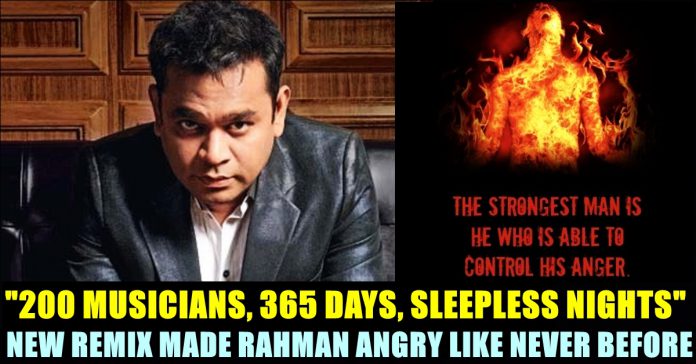 A.R Rahman, this time came with his all guns blazing against the remix makers. Responding to an unnecessary remix of his original song “Masakali” which no one asked for, A.R Rahman came up with a couple of posts in his official social media platforms. The song “Masakali” took place in the 2009 film Delhi 6, originally composed by the Academy award winner. The song was sung by Mohit Chauhan and the lyrics were penned by Prasoon Joshi.

Watch the original song composed by A.R Rahman below :

The remix version of it released by T-series with a title “Masakali 2.0” on Wednesday. While the original version had the montage moments of Abhishek Bhachan and Sonam Kapoor, the new version has Siddharth Malhotra and Tara as a drenched couple sneaking into a hotel room only to perform for the remix version of the epic song.

Here’s the recently released remix version of it :

Fans got upset on hearing the new version of it which is evident through their reactions in social media platforms. “can we mass report masakali 2.0 so it gets banned?” asked one of a fan whereas another one said “This quarantine feels better than Masakali 2.0”

Masakali 2.0. So now they also started rating songs out of 10 in the title itself

Every one was talking about how bad masakali 2.0 was so I went to youtube to check it out and I found this comment under the video 🤣🤣 pic.twitter.com/qugOmL9MHF

I always thought Abhishek Bachchan was totally useless but after watching Masakali 2.0 I seem to have found new respect for him.
#Masakali

Not only fans, the legend himself got pissed off on hearing about the new version of his work it seems. A.R Rahman came up with a twitter post, sharing the video link of the original song he composed by writing “No shortcuts, properly commissioned, sleepless nights, writes and re-writes. Over 200 musicians, 365 days of creative brainstorming with the aim to produce music that can last generations. A team of Director, a composer and a lyricist supported by actors, dance directors and a relentless film crew” in it.

The music composer recently expressed his disappointment in an interaction over remixing his songs. He has said that a song which was made already should be left alone. “It could not be ruined in the name of remix. The director was given an idea, The composer has done, The lyric writers done, The actors have acted. So it’s holy for people. You can’t take that, push all the names and put the remixer’s name on it” said the composer about giving the credit at least to the owner while remixing his song.

“They don’t even credit the original composer, that’s the annoying thing. So this generation will think that the song was done by the remixer and they would appreciate him. That’s not a good thing. Credits have to be given and permission has to be taken.” he said in that interaction.