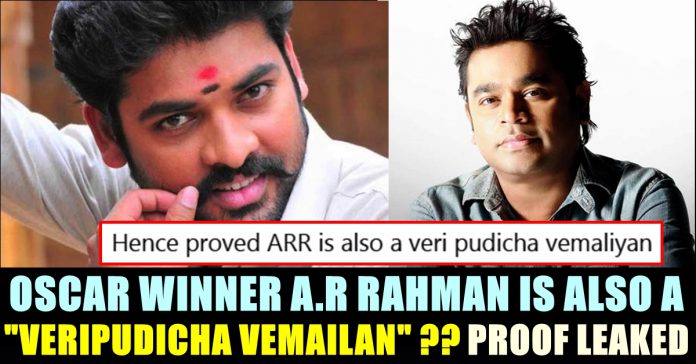 A.R Rahman Did This For Vemal !! Fans Couldn’t Believe

Galaxy star Vemal is all set to give his come back through the unofficial remake of Hollywood film “The Proposal”. Titled as “Sandakkari”, Vemal is going to pair opposite to actress Shriya who is known for pairing with Superstar Rajinikanth in “Shivaji”. The trailer of “Sandakari” released few days back and is going viral across the Internet.

The one minute fifty three minute long trailer shows Vemal and Shriya as an employee and a Boss respectively. The both are working in London as per the trailer suggests. To achieve what she desires in her professional career, Shriya fakes her love with Vemal in front of her higher authorities. To make them believe, she was forced to meet Vemal’s parents and relatives in a rural village in Tamilnadu. As soon as the trailer released, many fans got excited and started reacting to it as they are going to witness Vemal in big screen one more time.

Meanwhile, an unexpected gesture from Oscar winner A.R Rahman to promote “Sandakaari” has made the fans of him to raise their eyebrows. Rahman who enjoys more than 2 crore followers in Twitter posted the youtube link of “Sandakari” to make his followers watch it.

The only connect of A.R Rahman with Sandakkari that we audience know is that the musician has composed music for two of the Shriya starrers, Azhagiya Tamizhmagan and Shivaji. On seeing this Twitter activity of the universally acclaimed musician, users of Twitter couldn’t believe and started reacting to it in their own way. One of a commenter assumed that Madhesh, the director of Sandakkari is a producer of Mudhalvan which might have made Rahman to share his movie’s trailer as a sign of their friendship. It is notable that Madhesh debuted to Tamil film industry by directing Vijay’s “Madhura”.

Madhesh is the co-producer for Mudhalvan and believe he is your friend too…….that is the reason you might have shared this trailer…….hmmm…🤔

It is also notable that Rahman’s Twitter bio says that the account is being handled by an Administrator, not by the maestro himself. What do you think on the trailer of Vemal’s Sandakkari ?? Comment your views below !!