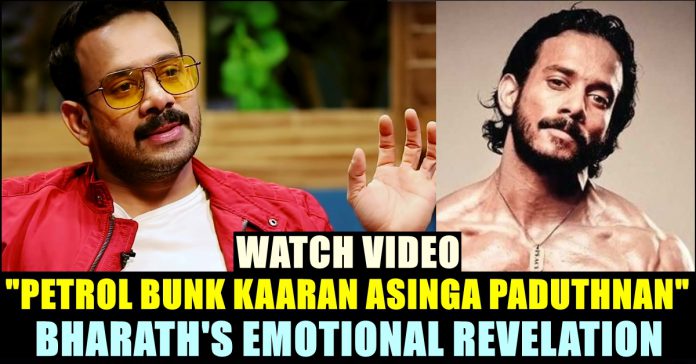 Actor Bharath’s interaction with video jockey Abhishek for the show Spot light has released in Youtube. The official youtube channel of Sun Music released the uncut version of the interaction in which Bharath could be seen sharing about the things he faced in his acting career which lasts more than 15 years. The actor shared about the humiliations he faced for not giving an impactful film for a very long time.

However the determined actor realized that Cinema is the place where he belongs though he did not have a father to produce or a brother to direct to make him give a come back in the industry. Bharath believes that he is yet to give a kind of film which has the potential to elevate his career to a next level. “I don’t have a father to produce or a brother to direct. I don’t do any business to switch like Aravind Swamy and to make a come back. I haven’t studied as well as I had to discontinue my studies for my film commitments.” the actor said in the interactions. “I need to depend on the cinema. I am here to stand, thrive and succeed” the actor says.

“Humiliations do happen. I experienced such humiliation when I go to places like petrol bunk. The guy who got employed there would ask me why am I not doing films nowadays. That is the very common laymen word which really hurts you. That question is nothing according to him. For him, I am just an actor. He will keep a genuine question on your table. It will hit you hard. That will make me question myself what am I doing in my life. I will pick my phone and call my producer and director why my film is not getting released.” said Barath in the interaction. “I don’t tell these things to get sympathy from audience. I can’t reach in the league where my films would do 30, 40 crores of business.” he added.

Watch the video below from 28th minute :

Bharath even expressed his wish of dancing in a huge grand set. “Till today I haven’t danced in a huge set. While seeing the songs of Allu Arjun and other high profile heroes, I would think of why I couldn’t dance in a set which is made in 20, 30% of its budget. I dance well. I dance extremely good. That is the pain I am going through” the actor said.

Actor Bharath who rose to fame among tamil audience for acting in films such as “Kaadhal” and “Pattiyal” is all set to make his come back in bollywood industry. Surprisingly, the actor who is desperate for a hit in Tamil cinema, is going to share screen space with the Superstar of Bollywood Cinema, Salman Khan. Meanwhile the recent release of the actor,”Kaalidas” received extremely positive reviews which let the makers of the movie to conduct a success meet.

Comment your views on these things shared by Bharath !!

The toll in cyclone Gaja has touched 45, Tamil Nadu Chief Minister K Palaniswami said on Sunday and appealed to leaders of all political...