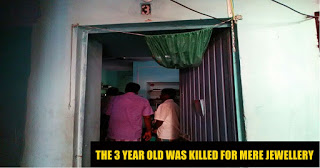 On February 5 a seven-year old went missing from her home in Chennai. Later her body was found dead and dumped at a roadside near Anakaputhur. Her neighbour was found guilty of sexually assaulting and suffocating her to death.

The police say that one of the neighbours (a woman) has confessed to the crime. The reason appears to be a murder for theft. Once the postmortem report is made available, will the police be able to confirm if there was any sexual assault.

The child’s body had apparently been carried away in a Corporation truck and was spotted by a rag-picker who was sifting through the heaps of waste that had been unloaded at the yard.

“On Saturday, around 12:30 at noon, Revathi-the mother of one of her (Neena’s) friends- dropped in, asking whether we would send Neena to play with her children. I allowed Neena to go, as the woman said that her daughter was creating a fuss and wanted to play with Neena.

Around 1:45 pm, since it was lunch-time, I went to their house to pick up my daughter. When I went there, one of their relatives present at the time said Neena had come there to play, but had left a little while ago. Everyone then began looking for her.”

By evening, with still no signs of her daughter turning up, Neena’s mother and her husband who works at a printing press filed a complaint at the Ennore police station.

“On Sunday morning, we were asked to come to Stanley hospital. I went there. But I did not have the courage to look at her face. She was dead,” whimpered the mother through her sobs.

Utterly shaken to the core, she asks: “Do you know…my daughter used to talk a lot….she was very smart. How can I live without her? She was my life.”

Revathi who has reportedly confessed to the crime is currently being interrogated along with her parents and her two brothers by the police.

Revathi in the building opposite Neena’s home. She is a divorcee is a divorcee and lives with her parents, two brothers and her two daughters. Initial reports say that Neena was kidnapped and murdered for the ornaments she wore, after Revathi confessed that it was sold off to a neighboring jewellery shop/

This inhumane activity has led to protests across the city. Further investigations would lead to more shocking revealings, the police said.