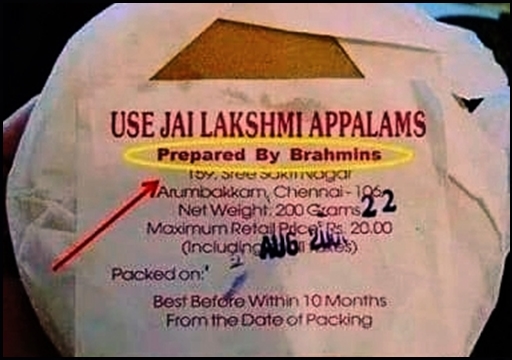 Label Of “Jayalakshmi Appalams” Which Was “Prepared By Brahmins” Created Huge Debate !!

After a twitter user, handle name of whom reads as Dr. B Karthik Navayan, uploaded a picture of the front label of an “Appalam packet”, a huge debate took place in the micro blogging social media site between two set of people. The label showed that the “Appalams” were prepared by Brahmins and Karthik, bio of whom says that he is a Practicing Lawyer, Ambedkarite and human rights activist, said that “Casteism” still exists in the society and people are just pretending like it went away. 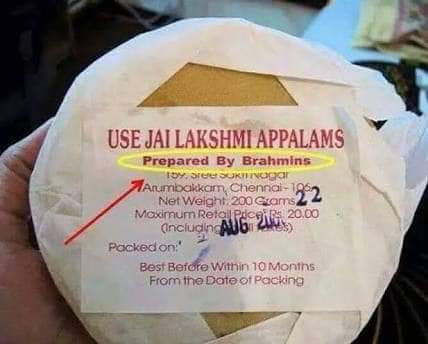 Despite of the several movements and actions are being taken against caste discrimination, caste pride and valuing people based on their caste is still being practiced by a large section of people, especially in the rural parts of the country. Karthik, in a way of venting his emotions out, came up with the post and talked about the existence of caste in the society.

“Casteism does not go away because you pretend it does not exist” capion of his post read. The picture he added show “Use Jayalakshmi Appalam, Prepared by Brahmins” in bold letters. Most importantly, company of the Jayalakshmi Appalam is located in Arumbakkam of Chennai which is evident through the label.

Casteism does not go away because you pretend it does not exist. pic.twitter.com/BAwmHeyi2Z

However, there were people who called out the act of mentioning caste name in the product’s label as well. Check out some of the reactions the lawyer’s post garnered :

Have started reading all the labels. Don’t want to end up making such people richer.

Caste discrimination is what you may try to speak. Food preparation is a personal choice.
Brahmin preparations ARE a brand by themselves. Specific ingredients, formula and preparation.
Your criticism is going to take you nowhere.

Use of caste is not castiesm or caste discrimination.
It is used to let the customers know how the taste would be. Setting sn expectation standard, Revealing the authentic taste of the product.

It would be nice if all Brahmins put this on their brands, I would avoid giving them business.

Dalit Indian Chamber of Commerce and Industry (DICCI) is casteist?

You just proved yourself wrong. Why do you have different food habit? Caste.
And even if it is ‘Brahmin diet’ why couldn’t that that same appalam have been made by an OBC or Dalit? Is there some mysterious power Brahmins making food has?

No, but let’s also not pretend that castiesm has gone away.

Tam Brahmin cuisine has a distinct flavour like by people of all castes. This is purely for marketing. Why should that bother you? isn’t there halal meat in the market? does it mean there’s discrimination?

No – I’m not a Brahmin and I specifically ask lot of times “I really would love to order Karela pickle made by Brahmins”. It doesn’t mean Casteism. It means “their” way of preparation. Get it or get lost.
Have you ever heard of “Halal” and “Kosher”? Who does Halal?

Casteism would’ve been if it said prepared by brahmins for brahmins. That is just stating a fact. You state your caste on your leaving certificate from school. Why get offended is someone else mentions their caste?

But yea can be assured of the products quality and hygiene.

Maybe Brahmins is considered equal to Hygiene, Honesty, Quality , by everyone who buys it ( irrespective of caste or religion).
Hence it is a message to potential buyers.

If you do not think so, do not buy it.

Every community in India have their own taste & flavor! Eg Chettinad is famous for their meat, same way Tambrahms have their unique style of cooking & taste! Most of us who lack cooking skills would buy the food prepared by that group that specializes it! I will buy both of these

So many dumb bigots are saying “if Halal is allowed, why not this?”. Difference is Halal items don’t discriminate based on birth or descent. Emphasis is on the method not on the person preparing. Actually shows how one system is inherently discriminatory and the other isn’t https://t.co/9smCxLXzLI

Previous articleVijay TV Stars Stretched Their Supportive Hand To Zaara !! Archana Got Emotional
Next article“Wine Is Not Liquor” – Said This Politician !! Check How Mumbai Police Replied