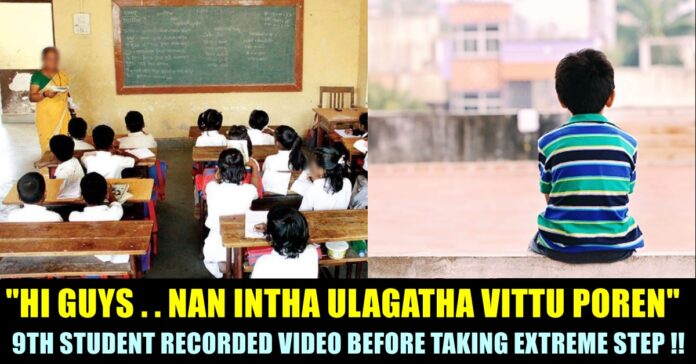 A 9th standard studying student recorded video before taking an extreme step of ending his life. In the video, the youth was seen blaming the school he was studying as the reason for his death. He said that they are harassing him physically and mentally. The teen student wanted his school to be closed permanently. 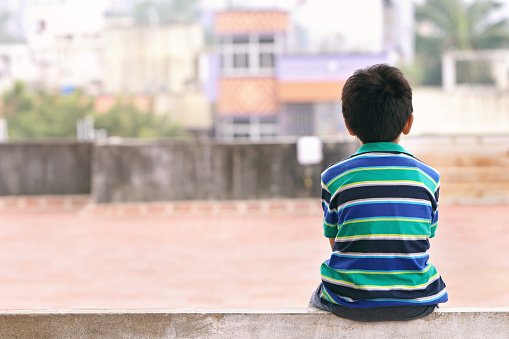 The student who belongs to Paadi, Ambathur of Chennai city is the younger son of an individual named Chandrasekhar who is working in a private company. Named as Bharathi Selva, the fourteen year old teen was studying 9th standard in a school named Lakshmi matriculation higher secondary school.

According to reports, Chandrasekhar condemned his son in the evening of Sunday for not studying well. The youth got depressed and took the extreme step on Monday. Bharathi Selva’s elder brother Paarthasarathy informed the police officials about the incident. Police officials of Korattur station who arrived at the spot, sent th body of the student for post mortem to Kilpauk government hospital.

Before hanging himself to death, the youth recorded a video and blamed his school teachers for the decision he made. He also said that his parents are not the reason for his death in the video, says reports. “Guys, I am going to die today. You can see blood in my hand. My school teachers are the sole reason for my decision” Bharati Selva was seen saying in the video.

“They kept beating and scolding me. I don’t like this life. I am going to die. I am going to leave this world. I want this video to reach my brother and it should be in news. Lakshmi school must be shut forever” he further said in the video which is doing rounds in social media platforms.

The rate of suicide cases in state Tamil nadu is increasing in daily manner and they are getting extra attention after plus two student Srimathi allegedly killed herself by jumping from the third floor. Now, the decision made by the 14 year old youth left online users in shell shock with many spreading awareness against suicide.

What are the reasons for student suicide???
No proper parenting
No proper teachers
No proper environment
No proper playing grounds and friendship like the old days… https://t.co/HTOFMqqkoa

If this continues no teacher will make any effort to correct or guide the students. This will result in rotting of an entire generation. 😢 https://t.co/pUVWDqhxAH

Teacher Should not beat Students. If any problem tell it to parents but beating them is not going to change anything. @Anbil_Mahesh do something

Can’t blame studenr for this.because he is a too young he is immature teachers should be mature enough to handle childrens. https://t.co/Auek5j3cmC

pysical abuse, body shaming, using foul language is soooooooo normal in my skool. for the one who is extremely new to such environment, its very tough to adapt🚶‍♂️ https://t.co/MPlIQHsvWb

2K kids need counseling on why suicide isn’t a solution for their problems https://t.co/pksK7VW6Rw

These 14 Late Night Restaurants In Chennai That Deliver To Your Place..

With late night parties especially on saturday's being a very popular option in Chennai these days, midnight hunger pangs are on the rise. Sometimes...