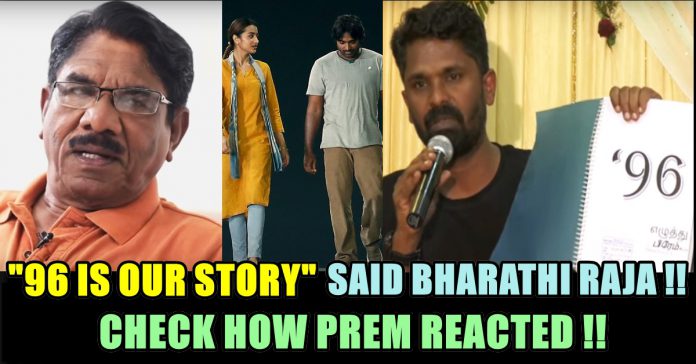 Story Theft issue in cinema is not something that is taking place today. Since the period of black and white films till today every now and then there are lot of accusations against so many films that they are involved in copyrights issue. South Indian writers association leader Bhagyaraj recently accepted that the plots of A. R Murugadoss’s yet to be released “Sarkar” and Varun Rajendran’s registered script “Sengol” are similar.

After the major issue like this been solved, now to our shock an assistant director of Bharathi Raja accused that the story of 96 is belong to him. He says that he titled the film as “92” and the Story was theft by Prem Kumar through Maruthu Pandi the director of “Chennaiyil Ungalai Anbudan Varaverkirathu” which starred Bobby Simha.

Suresh the assistant director of Bhharathi Raja who worked with him for 10 long years says that the stroy of “96” was happened to him in real life/ He says that he narrated the story to Bharathi Raja and asked him to direct the movie where he planned to work as a writer for the film.

“Nearly 200 people called me after watching the movie as they know that it is my story” says Suresh. I first planned to approach director Vetri Maran but he denied, then I thought Danush will be apt for the role. Later I tried to approach Vijay Sethupathi but I could not meet him. I narrated the whole story to Maruthu Pandiyan whom I felt as a dear friend but he betrayed me by stealing the story and lend it to his friend Prem Kumar” he accused.

Though he says that he did not registered the story in writers association as he thought that narrating to his master Bharathi Raja is more than enough. Both Bharathi Raja and his assistant Suresh wants to meet Prem Kumar in person and they also intend to complaint in the association.

On seeing the allegation director Prem Kumar appeared in a press meet with the support of directors Balaji Dharanitharan, Thyagaraja Kumararaja, Maruthu Pandiyan. The director produced every written work of him for the film “96” infront of the press in order to prove himself. He also bashed that their allegation is baseless and their proofs are blunt. “They are just showing location photographs which is questionable. I wonder if I theft their story or locations. I started writing this story during Chennai floods and approached Vijay Sethupathi in January” said Prem Kumar in the press meet.

Thyagaraja Kumararaja, the director of, Aranya Kandan and upcoming Super deluxe asked why would someone like Bharathi Raja should approach Vijay Sethupathi through third person. “If he asked Vijay Sethupathi himself there would be no denial which i can say for sure” said TK in a humorous way by imitating Bharathi Raja.

Can you find who says the truth among these filmmakers ?? Please let us know by commenting below !!

Video of world champion Mike Tyson being unable to remember acting in the recently released Pan Indian film "Liger" is trending in the social...

For Missing Kalyani Priyadharshan, Actor Got Angry & Questioned His Director !!

Venkat Prabhu's directorial "Maanadu" is finally going to see the light it seems. The film which got initiated during mid 2018 with a first...