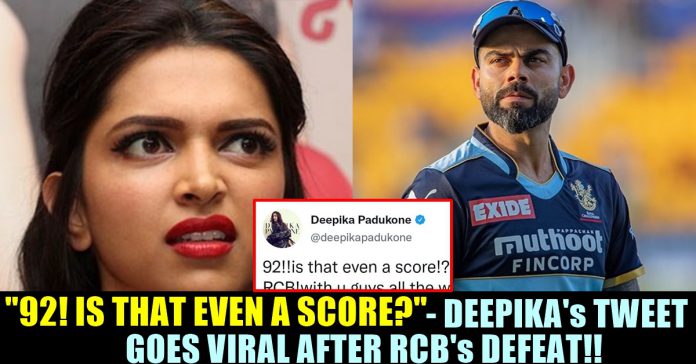 92!!is that even a score!?way to go RCB!with u guys all the way…watching every second of it live!

People have now brushed up this tweet and have reacted to it. Bheemla Nayak has commented, “She Predicted it 11 Years Ago”

Rags has commented, “What goes around comes around! But Deepika is right. Let’s take it on our chin and move on to win the next match!”

This is the match she’s talking about lol😂😂😂😂 pic.twitter.com/JRn5NBVwwz

what goes around comes around! But Deepika is right … let’s take it on our chin and move on to win the next match! @deepikapadukone https://t.co/WI8tZHeYBa

She Predicted it 11 Years Ago https://t.co/iCMC4UPvEH

While she is been dating with Kohli or chota malya .. https://t.co/zjPix16p9D

If Newton’s third law of motion was a tweet – https://t.co/goCdLhZZF8

Previous articleMakers Of “Pei Maama” Getting Trolled For Copying This Old Film’s Poster !!
Next articleFood Reviewer Irfan Getting Slammed For Endorsing “Biriyani Brothers” !!

If you are not living under rock, you must have crossed a post against Meera Mithun of Tamil Bigg Boss show. Viewers of the...

RJ Vignesh Replied To Those Who Spewed Hatred At Him For His Statement On “Karuppar Kootam” !!

Comedy actor and youtube influencer RJ Vigneshkanth came up with a post saying that he never shied away to exhibit his devotion towards lord...