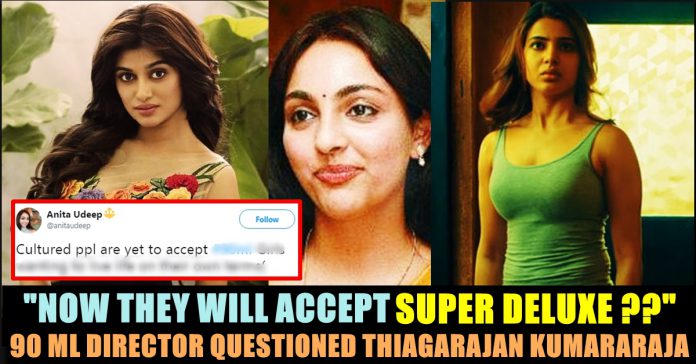 90 ML is the recent sensation which created massive controversy among the cinema goers. Being criticized by many including some people from the industry itself, the film had actress Oviya in the lead. During the film’s release time, director of the film Anitha involved in arguments in Twitter against those who opposed the movie. Movie reviewer Prashanth and popular producer Dhananjayan are two of the main people who disliked the movie and for it’s adult content and the way it has been treated by the makers of the movie.

90 ML Director Anita Udeep Continues To Troll Dhananjayan For His Comment About Her Movie !! Check Out !!

Even the producer at one point declared that the film is a curse for Tamil cinema where the reviewer asked the director to stop making films just because she is having lot of money.

Now after the release of the film Super Deluxe, Anita has come up with a tweet comparing both the films. She asked if those people who opposed her movie will accept this one as it portrays the life of flawed women, prostitutes and Transgenders.

Her tweet read as “Cultured ppl are yet to accept #90ml Girls wanting to live life on their own terms( popularly known as “th*****ya”). If only 5 girls had replaced the 5 boys in #superdeluxe film. @itisthatis 🤪 flawed women, prostitutes, transgenders – is there a chance for them 2 b accepted?” (@itisthatis is the twitter handle name of Thiagaraja Kumararaja)

Cultured ppl are yet to accept #90ml Girls wanting to live life on their own terms( popularly known as “th*****ya”). If only 5 girls had replaced the 5 boys in #superdeluxe film. @itisthatis 🤪 flawed women, prostitutes, transgenders – is there a chance for them 2 b accepted?

Following this she also involved in arguments with the replies of her followers. Check out them here :

Phew!! Pls. Understand my tweet b4 commenting..I’m not comparing dear

Cinema is an art medium..there are no rules. U either like it or u don’t. This is my presentation..it’s my expression.

I’m actually tired of the T word! While watching Super deluxe, I was thinking “ingiyuma”😊

I liked some parts and thought it was overall engaging

Directed by Thiagarajan Kumararaja, the screenplay for this film has been co-written by Mysskin, Nalan Kumarasamy, Neelan K. Sekar and the director himself. The film is divided into various segments and stars Vijay Sethupathi, Fahadh Faasil, Samantha Akkineni and Ramya Krishnan in lead roles.

Have you watched both the movies ?? What do you think on the statements of Anita ??

Who Was The Mystery Woman Accompanied Abhinandan Through The Border ?? Check Out The Full Details Here

There was happiness and cheer across the county after Air Force pilot Abhinandan Varthaman was released by Pakistan today. Prime Minister Narendra Modi and...