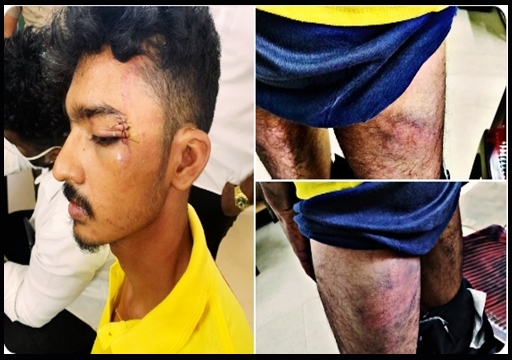 Nine Police personnel including an Inspector arrested for physically torturing a 22 year old law student Abdul Rahim inside a police station that is located in Kodungayur, Chennai, Tamil nadu. The strict action was taken against the police officers after Abdul released a video explaining about the trauma he went through. The youth said that he was made nude and was humiliated inside the Police station and questioned how suspension will a punishment to those officers after a report about two police officers getting suspended surfaced.

First Information Report has been filed against the inspector of Police of the MKB Nagar All women Police station, Nazeema and eight other police personnel after Advocates and law students staged a protest in front of the office of the Deputy Commissioner of Police in Pulianthope. Earlier, a police constable and head constable were placed under suspension in connection with the case.

It all started after Raheem, a fifth year law student was stopped at MR Nagar near Kondungayur for not wearing a mask. It is alleged that Raheem slapped a police constable during the argument that took place a the spot. The law student was arrested and was released on bail.

Here’s a video of Abdul narrating the ordeal he went through :

In the video, Raheem says that he never slapped anyone but only refused to pay the fine they imposed on him. After releasing, Raheem released a series of pictures of his injuries, stating that he was badly beaten up by the Police officials. He said that the police officials kicked him with the boots and caused brutal injuries all over his body. Pictures of the youth’s injuries started circulating in social media platforms as a result of which two cops were suspended.

Reacting to the action, Raheem released a video saying that suspension is not enough for what he went through inside the police station. “Naseema mam was the one who is responsible for what happened to me. FIR should be filed against Naseema mam, Rudhra kumar and Bhoominathan” Raheem said in the video.

Sad to see, Policemen are not changing their way of approach in any government. Stringent action needs to be taken other than suspension. Then only none others will do the same again.

“Is suspension the only punishment for what they did to me ? No matter if I got beaten or made to remove all my clothes or died, they will only get suspended ? I don’t want them to be suspended for the sake of it. Strict actions should be taken against them. I am not going to eat or sleep until that. I died inside when they made me nude and humiliated. I want no one to go through what I experienced” he could be seen saying in the video.

Protestors took to the streets on Thursday and demanded an FIR to be registered against the inspector of Police Naseema. A recent report surfaced saying that the inspector and eight other police officials  were booked under Indian Penal Code sections 323 (punishment for voluntarily causing hurt), 324 (Voluntarily causing hurt by dangerous weapons or means) and 294 (b) (sings, recites or utters any obscene song, ballad or words, in or near any public place).

Previous articleWhen Vijay Talked About Raju To His Best Friend Sanjeev !! WATCH
Next articleYouth Arrested For Blocking The Way Of Ambulance For 40 Kilometres !! Video Goes Viral