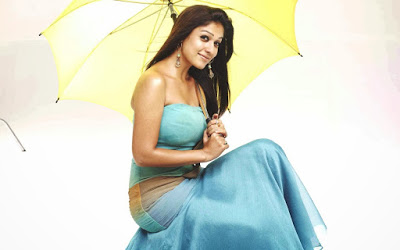 Though South Indian stars enjoy much fame and success in their respective states, on a national level they still remain slightly anonymous. One such diva, who has delivered many blockbuster hits in Tamil Nadu, Kerala, Karnataka and Andhra is Nayanthara. She also happens to be celebrating her 31st birthday today, on the occasion, let us take a look at some of the lesser known facts about the talented and gorgeous actress.

1. Nayanthara hails from Thiruvella in Kerala. She was born as Diana Mariam Kurian to Orthodox Malayali Syrian Christian parents in the city of Bangalore.

2. She has travelled and lived in various cities across India owing to her dad being in the Indian Air Force. Her schooling thus has been divided across various places such as Jamnagar, Delhi and Tiruvella.

3. She made her début into the world of films first in the Malayalam movie Manassinakkare. She was spotted by the films director during her college days as a model.

4. In 2011, Nayanthara converted to Hinduism at the Aarya Samaj Temple in Chennai, it was after this purification ceremony that her stage name became her official name.

5. In the continuing years, especially 2014, the actress visited a number of Hindu holy places such as Rishkesh and Haridwar.

6. She has won 18 awards out of the 30 odd nominations for her at the various festivals and award shows.

7. The actress has graduated with a degree in English Literature from Marthoma College. She wanted to further pursue studies in CA but had to drop the same due to her commitment towards films.

8. She has acted in over 57 films. She is also the original heroine in Bodyguard the original Malayalam film that was then remade in various languages including the Bollywood version with Salman Khan.

9. She has not just played glam-doll roles, in fact she was praised a lot for her role as Sita in the movie Sri Rama Rajyam.

We wish Nayanthara a very happy birthday and hope this year like the previous brings her success and happiness!

Previous articleHow social media shaped our understanding of the Paris attacks
Next articleChennai floods are not a Natural Disaster… It is MAN-MADE..

Padma Priya Proudly Announced About Her Entry In DMK Party !! Got Trolled

Former Makkal Needhi Maiam party member Padma Priya announced about her joining in the DMK party with a couple of tweets on Friday and...