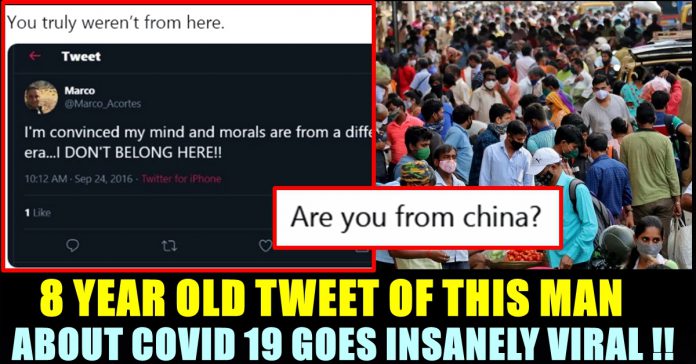 An 8 year old tweet of a twitter user about the deadly virus COVID 19 which is killing millions of people across the globe has freaked out the users of the social media platforms. The guy named Marco has predicted about the arrival of the virus in June month of the year 2013. The tweet got blew up across the globe with people dropping comments in various ways.

Currently, majority part of country India is going through an intense lockdown to prevent the surging positive cases in the country. The lack of medical facilities in the country worsens the situation more with the number of total deaths increasing in daily basis. So far, the world has witnessed, 32 million deaths so far due to the virus. The total number of cases got increased to 15.8 crore with 9.44 crore recoveries.

It is obvious that none of us could have imagined that the entire world would be fighting such virus which was allegedly caused by a bat in China. But one person in Twitter has predicted it years ago and warned the world, tweet of whom is going viral in social media platforms now. The tweet of Marcos read “Corona virus….its coming” and it was posted exactly at 9 : 02 PM on 3rd June of 2013.

The tweet garnered 200 thousand plus likes so far with lakhs of reactions from the users of the micro blogging social media site. With many people alleging that Marco could have hacked twitter and changed the tweet, many freaked out on seeing the accuracy in prediction. However, a social media user wrote “This guy didn’t predict Covid-19. Corona is a particular form of virus of which Covid-19 is one. Please retweet and dispell nonsensical notions.”

Corona has been there from all these years , in 2019 it was found again pic.twitter.com/ml23OfCdhL

This guy didn't predict Covid-19.
Corona is a particular form of virus of which Covid-19 is one.
Please retweet and dispell nonsensical notions.@cugwmui @xyz15141514 @sharyk76 @samvidhanik @Hello_nicks

You truly weren’t from here. pic.twitter.com/GgUa2cRon9

Are you from china?

The last tweet of Marco surfaced on December 11, 2016 and he hasn’t uploaded anything after that. His last tweet shows a simple “smiling” emoji.

Previous articleJulie Replied To The Derogatory Comments After Uploading A Picture With Her Brother !!
Next article“We Have Not Issued Any Privacy Complaints” – Archana Clarified After Sharing The Screen shots Of Abusive Texts Of Followers

Prime Minister Narendra Modi today took a holy dip in the river Ganges during the ongoing Kumbh Mela in Uttar Pradesh's Prayagraj and offered his...

Tamil nadu based online users who are born between 1990-99 baffled on seeing a video which shows thousands of people who are believed to...

On Tuesday, Netflix debuted the teaser of Meenakshi Sundareshwar, an upcoming romantic comedy starring Sanya Malhothra and Abhimanyu Dassani which is being produced by...