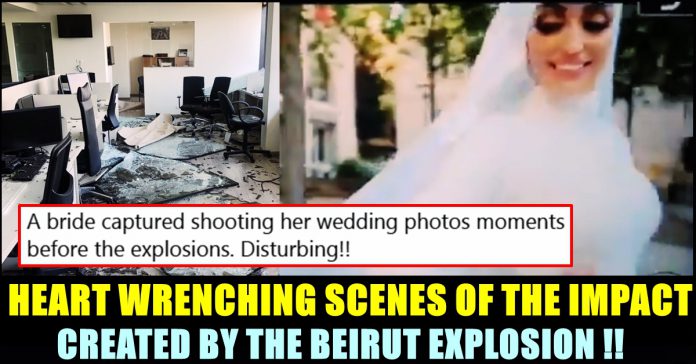 The viral video of the massive explosion that took place in Beirut shocked the entire Internet. The scale of the disaster is immense and the Prime minister of India posted a tweet expressing his condolence. “Shocked and saddened by the large explosion in Beirut city leading to loss of life and property. Our thoughts and prayers are with the bereaved families and the injured: PM Narendra Modi.” read the tweet of Narendra Modi.

Shocked and saddened by the large explosion in Beirut city leading to loss of life and property. Our thoughts and prayers are with the bereaved families and the injured: PM @narendramodi

Major General, Abbas Ibrahim, of Lebanon’s General security Directorate, said the massive blast that shook Beirut’s port area on Tuesday was caused by “confiscated “high explosive materials”. it would be naive to describe such as explosive as due to fireworks” Ibrahim told Lebanese TV.

About 2750 tonnes of Ammonium nitrate were stored in the Beirut port warehouse that exploded Tuesday, devastating large parts of the Lebanese capital, Prime minister Haasan Diab said. “It is unacceptable that a shipment of 2,750 tonnes of ammonium nitrate has been present for six years in a warehouse, without taking preventive measures,” he said at a defence council meeting, a spokesman told a press conference. “It is unacceptable and we cannot remain silent on this issue” he added.

CNN report suggested that 78 people died and nearly 4,000 people injured due to the explosion.

WARNING GRAPHIC: People were filmed receiving treatment at St. Joseph Hospital in #Beirut as the death toll climbs to 78 with 4,000 injured following a huge explosion on Tue. Lebanese PM declared a "national day of mourning" for the victims #PrayforLebanon pic.twitter.com/SOstsx8Wnu

A news update said that the explosive occured in an ammunition warehouse belonging to the Hezbollah terrorist organization.

BREAKING: Al-Arabiya news network reports that the #BeirutBlast was in an ammunition warehouse belonging to the Hezbollah terrorist organization. #Beirut pic.twitter.com/t06aI22M07

People living in the place started sharing pictures and videos of the damage that occured by the explosion.

My apartment in Beirut was just blown apart. We think it was a missile from a jet. We're ok.

Lebanon bombed. My House bombed . I am bleeding

The coronavirus saved us. This is our AP office this morning #Beirut_Explosion pic.twitter.com/0RFtWt6gy5

A directed-energy weapon (DEW) is a ranged weapon that damages its target with highly focused energy, including laser, microwaves and particle beams.

This is what a DEW looks like. This is NOT footage from #Beirutpic.twitter.com/oKuUxiE2QC

😳 😳😳😳😳 Watch how this brave father protects his son during today’s explosion in Beirut. Praying for Beirut and rest of the world 🙏🙏 #beirut #lebanon #prayforlebanon pic.twitter.com/BNYaxudP5p

Morning from #Beirut. Like so many, I’m waking up from a 2 hour nap on my sofa with gaping holes in my walls, wondering where I am going to live. So many dead, injured, missing, so much destroyed. How can the country possibly fix this and get back on its feet? pic.twitter.com/YNHVJEqsLn

Heroic nurse rushes to save three newborn babies when the explosion went off. These are the people we owe everything to.#Beirut pic.twitter.com/ZgRZHdGRfK

We have seen many heroines coming up with allegations against men who misbehaved with them during the process of filmmaking. The latest one to...