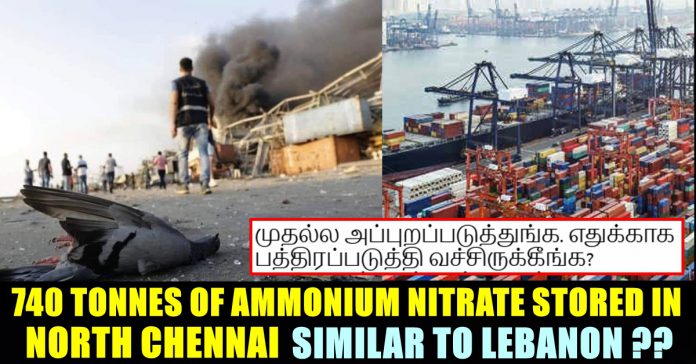 A news update on 740 tonnes of Ammonium nitrate, seized by customs officials from a company based in Karur which illegally imported it 6 years ago shocked Internet. The confisticated explosive material is being safeguarded in the containers at a freight station in congested north Chennai since 2015, according to reports. Officials were checking the status of the explosive material, after the massive blast that took place in Beirut, Lebanon.

At least 135 people died due to the explosive that took place in Lebanon and 3,00,000 people have been displaced from their homes. More than 5,000 people found injured. The powerful blast felt more than 150 miles away in Cyprus, leveled whole sections of the city, near the port of Beirut on Tuesday evening, leaving nothing but twisted metal and debris for blocks in Beirut’s downtown business district.

About 2750 tonnes of Ammonium nitrate were stored in the Beirut port warehouse that exploded Tuesday, devastating large parts of the Lebanese capital, Prime minister Haasan Diab said. “It is unacceptable that a shipment of 2,750 tonnes of ammonium nitrate has been present for six years in a warehouse, without taking preventive measures,” he said at a defence council meeting, a spokesman told a press conference. “It is unacceptable and we cannot remain silent on this issue” he added. It is expected for the government to face a severe financial crisis due to the damage.

Now, sources have confirmed that a large quantity of ammonium nitrate was in the custody of customs authorities for minimum 5 years in Chennai. “Every consignment has been mandated a unique procedure of safe keeping and I believe it is followed by our officials too” said a senior Customs officials who added that officials are checking the status of the explosive materials. The Petroleum Explosive Safety Organisation is also checking the current status of the seized material as it could turn lethal if kept unused for a long period without maintenance.

The 37 containers of ammonium nitrate which was consiticated from a Karur-based firm in 2015 as they brought in without obtaining the proper license and permission from the government, is commonly used to create explosives for mining and other purposes. The crystal like white substance is used by armies and terrorist organisations across the world for its explosive nature.

As soon as the news update emerged, netizens are requesting the Government authorities and Chief minister of Tamil nadu state to dispose it immediately to avoid destruction.

740 tonnes of ammonium nitrate sitting in chennai harbour since 2015 . Authorities have just started checking. Hope @CMOTamilNadu sir will take special care and get the issue fixed.

Previous articleShaam Opens For The First Time Regarding The “Gambling” Controversy !!
Next articleBoy Asked Sonu Sood To Buy Him Rs. 28,000 Worth PS4 !! Check The Actor’s Reply

“Where Are Those Who Said Dupatta Will Save A Girl ??” Asked This Famous Personality !!

Entire country erupted seeking justice for the 19 year old Dalit girl who was sexually assaulted by four upper caste men. She succumbed to...

A video released by acclaimed actress Priyanka Chopra addressing the Russia-Ukraine war landed her in soup as many people from India who watched the...