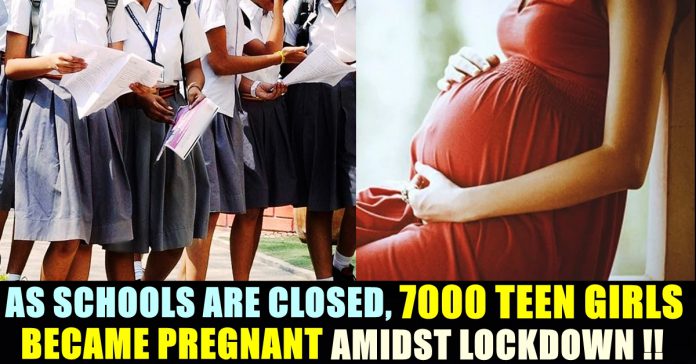 Amidst several problems the world is facing due to the COVID 19 crisis, more than 7000 girl students got pregnant in East Africa’s Malawi. As the entire world is struggling to combat the global pandemic caused by the COVID 19 virus through maintaining social distancing, we have been hearing about many cases based on sexual violence against women. Now, this report from Educational officials of Mangochi district in Malawi shocked the users of Internet across the world.

Four months ago, the country implemented lockdown to prevent the virus from spreading. The report suggests that over 7000 teenage girls in the locality of Mangochi district have gotten pregnant. Peter Malipa, the youth friendly health services coordinator for the district, said the current figures are up by 1000 pregnant teenage girls in comparison to last year’s numbers around the similar period. The official added that 166 among the pregnant girls are as young as 10 and 14 years old.

In March month, the Malawi government ordered the closure of schools. As soon as the announcement surfaced, the Phalombe township recorded 1000 pregnancies while the Mzimba and Nsanje townships recorded 400 and 324 pregnancies respectively.

Meanwhile, Kenya recorded 1,50,000 pregnancies during the COVID 19 lockdown. Benedicto Kondowe, The director of the Civil society Coalition on education has said that the emergence of COVID 19 has adversely affected the lives of young women in the country. “A spike on Gender based violence, exploitation and other kind of abuses against adolescent girls taking place during this period”. he said. The Mailwan country has recorded 3,700 positive cases with 100 deaths so far.

Officials of Kenya, during the beginning of July, announced a surge in the number of teenage pregnancies during the three months of lockdown. 1,52.00 Kenyan girls became pregnant in the last three months which is a 40 percentage increase in the monthly average. The authorities fear that close relatives of the underage girls could be responsible for their pregnancies. Kenya reportedly has one of the highest teen pregnancy rates in the world, making up 82 out of 1000 births.

All of our plans to improve our financial status in 2020 tumbled in front of our eyes due to this Lockdown implemented by our government as we are having a deadly virus which killed more than 6.79 lakh people across the world at our doorstep. However, it didn’t prevent the people in East Africa from making teen girls pregnant. This news shocked the Internet as many people expressing their concern over the girls who are supposed to go to school.