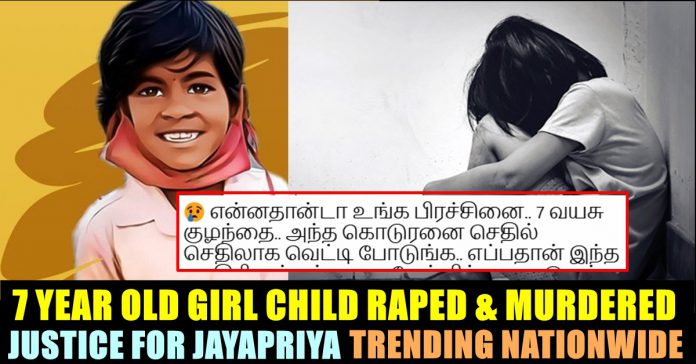 The series of recent happenings of rape and murder shook the entire country and made a very big impact in social media platforms. Amidst, the Corona crisis, while the entire world is combating against invisible virus, crimes that questions the entire human ethnicity and the way it got brought up are surfacing constantly. Just about people started thinking that they are getting justice in Sathankulam double murder issue after a sub inspector got arrested, a horrific report on 7 year old girl named as Jayapriya left the entire internet in utter shock.

A twitter trending demanding “Justice For Jayapriya” has made a big impact in the trending list of the micro blogging social media site. Jayapriya, a 7 year old girl who belongs to Arimalam in Pudhukottai was missing for past two days, according to reports. Parents of the child registered a police complaint in Embal police station and a search was on since then. To our shock, Jayapriya was found dead near a pond named as “Kilavithammam”. She was attacked by 3 men and was raped by them says initial reports. Several wounds were found in her body and the final pictures of her are being shared widely in social media platforms seeking justice for the girl child.

While talking to media, Pudukkottai district superintendent of Police Arun Shakthi said that 2 youths were arrested and investigation is underway. “There won’t be any delay like Gantharvakottai girl child murder case in this case. Details will be released soon” he said to the media.

Brutal rape and murder of this innocent child shakes the conscience of human being. When will all the women and children feel safe ? When will we clearly address this brutal sexual violence pandemic ? How many more justices should we fight for ? #JusticeforJayapriya pic.twitter.com/LVZWj1kU3R

For the #women
When you speak up
They silence You
When you Rise
They Underestimate You
When You Ignore
They constantly Bully You
“They” could be any hypocrite despite the gender. When are we going to feel safe ?
Shattered to see her innocent face ∆ #JusticeForJayapriya pic.twitter.com/RXu71jbdKN

And again one more tragedy from Tamilnadu. A 7 years old child was raped & Killed in Pudukottai district (T.N).#JusticeforJayapriya pic.twitter.com/CGnsmBomVt

Jayapriya, a 7 yr old Child was brutally raped and murdered by 3 unidentified men in Pudukottai. When will these inhuman acts stop. She’s just a child. #Heartbroken. Please spread this message and hope hope hope these B***^^^^*^ds are shot at sight. #JusticeforJayapriya pic.twitter.com/xYP0WJj4K2

Find a new name for human beings, no more they deserve to be called as humans.

Again & again shameful acts by these wild animals in face of humans. How innocent she is😢#JusticeforJayapriya pic.twitter.com/qoAwQ8ncpX

Previous article“Fenix Never Forced Us To Pay Our Due”- Sathankulam Resident
Next articleTamil Director Regrets For Giving Birth To Two Girl Children !!

Singer and voice artist Chinmayi who is known for her raising voice against women harassment through "MeToo" movement, exposed an Instagram user who sent...