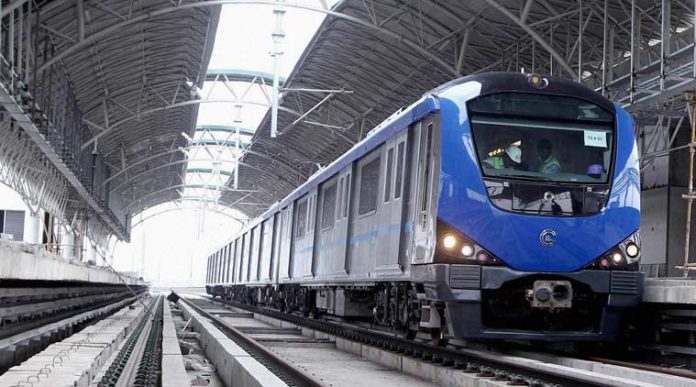 The first phase of the multi-crore Metro Rail was flagged off by Chief Minister J.Jayalalithaa and was opened to the public on 22nd June 2015. Here are seven things you should know about this mass rapid transport system-

1 – According to The Hindu, the metro is running on a 10 km stretch from Chennai Moffusil Bus Terminus to Alandur. The tickets prices range from Rs.10-40. The trains will run from 5 am to midnight.

2 – With the launch of its metro, Chennai has become the fifth Indian city to have metro connectivity.

3 – To make the metro disabled-friendly, there are long-stop buttons provided through which the physically challenged can request trains to stop for a longer duration. At the front and back compartments of each train areas have been assigned for two wheelchairs.

4 – While some commuters took to Twitter to complain that the instructions and route map within the Metro were only in Tamil, the instructions have in fact been provided both in Tamil and English. The Metro has also put out a helpline number for commuters- 18604251515

5 – The first train which left at 12.15 pm on 22nd June from Alandur to Koyambedu was driven by A Preethi, a 28 year old diploma holder in engineering from Government Dharmambal Polytechnic College here. Preethi quit her first job to apply for a job at Chennai Metro Rail to become a loco pilot. She was the first woman to get selected. “I am excited, my daughter’s dream of becoming a loco pilot of Metro Rail has come true,” Preethi’s father R Anbu.

6 – The Metro Rail project is being built to cover 45 km through two routes- the 23.085 km Wannarapet to Airport section and the 21.961 km stretch from Chennai Central to St.Thomas Mount.