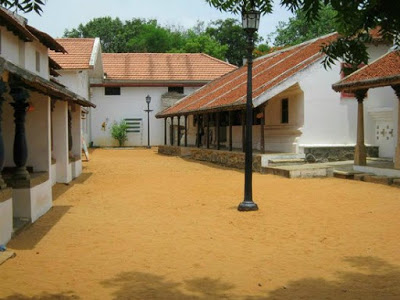 Literally meaning “a picture of the South”, Dakshina Chitra reflects upon the constant advancement of South Indian art and culture in its beauty, traditions and innovations. It was opened to the public in the year 1996. It is a product of the non-profit organization Madras Craft Foundation (MCF). It was organized mainly to revive the dying traditional cultures of South India due to globalization, westernization and rapid changes in the lifestyle of people. It is a brave and novel attempt, which is not only a showcasing of the ancient traditions, but its constant connection with the present. Let’s explore some reasons that make it a must visit place.

7. A pan South-Indian celebration of cultures

Dakshina Chitra is spread over a huge span of land and is not merely a location. It is created as a sort of a faux-village or a heritage village – a place where contemporary and traditional art forms of dance, music, folk performing arts find expression. Traversing through the open air museum is like undertaking a journey of revelation and self-discovery. The ten acres space is divided into four segments covering the four most important states in South India namely Kerala, Tamil Nadu, Andhra Pradesh and Karnataka. To know about South India, there can be no better place.

Promoting the dying crafts and developing them to revive traditions by reaching out to people, mainly youngsters is an essential facet of Dakshina Chitra. Here, you will come close to different forms of crafts, which are authentically South Indian and which will give you an overall idea about the whole tradition of craft native to the surrounding lands. Various exhibitions are held from time to time exhibiting traditional crafts and textiles to visitors.

The folk performing art of South India is one of the major attractions at Dakshina Chitra. You will witness various forms of Folk Arts that are performed throughout South India in many states. It is a beautiful traditional art form, which is dying a slow but steady death because of rapid urbanization of people’s lifestyle and mainly due to television and cinema. The beauty of it somehow is not reaching the youngsters who will keep this art alive. These art forms were once very famous and extremely popular at festivals in the villages of South India but are now facing oblivion. Puppetry is one of them.

Since it is actually an open-air museum, it is not stuck to static objects and arts but the dynamic ones as well. You will be able to watch traditional South Indian dance and listen to music at the festival. South India as you know is incomplete without music and dance! Coming to dance, apart from showcasing the performances of Bharatnatyam and Kathakali (which are very famous), the centre takes great care in acquainting the audience with lesser-known dance forms like Devarattam, Therukootu, Tappattam, velakkali, Kommu Koya, Padayani, Pava Kathakali, Dollu Kunithu and Garagalu among others. An exhibition named ‘Introduction to Music’ is held in the amphitheatre-shaped performance area of the centre which introduces the audience to the evolution of the music form and its association with temple and folk music. All kinds of folk groups portray their talent here and perform in these exhibitions and workshops which are meant for not only visitors but school students and their teachers as well.

Dakshina Chitra organizes yearly celebrations of the different festivals catering to south India, which bring people together. Through this the customs, crafts and folk arts of these regions are highlighted. The festivals which are celebrated here are: Ugadi (Andhra Pradesh), Pongal (Tamil Nadu), Onam (Kerala) and Dusshera (Karnataka). These festivals throw light upon various lesser-known Folk Performing Arts groups from villages in South India. It is a treat to watch these group perform.

2. Cross cultural living museum – It’s not only about the South

Dakshina Chitra is not only about the life and culture of the South. It adds to its variety by showcasing performances of traditional arts of other states and cultures as well. There are Folk Art Groups belonging to different regions of India who come and perform at this stage at special festivals. They include the states of Rajasthan and West Bengal. You won’t really mind an occasional shift from the south setting, wouldn’t you?

1. When it’s the South, food can’t be far behind

This is for the foodie who does not mind to gorge on a delicacy or two while visiting a place. There is a restaurant known as Kanali which will serve you the best of meals (purely South Indian). You must try the lunch thalis which are known to be delicious along with the others.